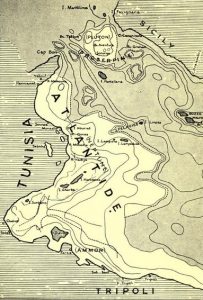 Férréol Butavand (1875-1938) was a French engineer and a keen archaeologist,  being one of the early investigators at Glozel. In 1925, he published his La Veritable Histoire de L’Atlantide[205] in which he expressed the view that Atlantis had been located on a series of sunken islands off Tunisia in the Gulf of Gabes. The area suggested by him would have included the Maltese Islands, part of Sicily and the entire east coast of Tunisia including the islands of Kerkenna and Djerba. Alberto Arecchi among others has recently revived and expanded on this idea.>This compiler also agrees with many of Butavand’s ideas.<