Lee R. Kerr is the author of Griffin Quest – Investigating Atlantis[807] which is a feeble attempt to breathe new life into the Minoan Hypothesis and it sadly fails. Most of the book is taken up with the author’s search 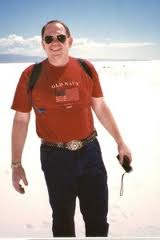 for images of griffins (gryphons) in various museums in Santorini, Crete and Athens. He found very few and so what? There is no connection whatsoever between Atlantis and griffins.

>In October 2021 the Malagabay website published an extensive and fully-illustrated article on the ancient association of griffins and gold(b).<

I think it disappointing that the author, who practices as an attorney in Texas, can produce such a flimsy offering. It may explain why used copies have been available from Amazon.com for as little as one cent.

In case anyone is interested, the griffin is part of a related group of mythological creatures which includes sphinxes(a).

In 2015, Kerr launched a sequel, Atlantis of the Minoans and Celts[1104]. This simply rehashes claims in his first book, padded unnecessarily with too many pointless images. Unable, to reconcile Plato’s description of the Plain of Atlantis with his version of the Minoan Hypothesis, he concludes that there was a second island larger than Thera and then based on the theory of Ulf Erlingsson he decided that Ireland was it. As an Irishman, I would be delighted to find a connection between my homeland and Atlantis. However, again I found this new claim even less convincing than his Theran ideas. Furthermore, Kerr is either unaware or has ignored the fact that Erlingsson places the flooded Atlantis on the Dogger Bank in the North Sea, not the Central Plain of Ireland, which, to the relief of its inhabitants, is still above water.

Not content with that, Kerr, returned to Ireland in another volume, Atlantis Aftermath [1675], in which he seeks to link my homeland and its ancient monuments with the eruption of Thera. His ‘quest’ also takes him to Spain, Portugal and Switzerland, when to my utter relief he finally announced that “for me, I feel satisfied that I had completed my Griffin Quest.” Let’s hope so.