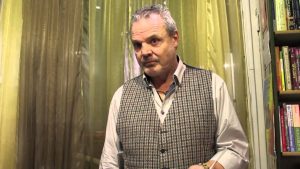 Ian Lawton (1959- ) is an English researcher focused on ancient history and spiritual philosophy. He is probably best known as the co-author with Chris Ogilvie-Herald of Giza: The Truth [1690], which offers a sober forensic review of all the many and widely varied theories relating to the ancient structures on the Giza Plateau.>In it, Lawton was highly critical of Robert Bauval‘s Orion Correlation Theory (OCT) both in the book (chapter 9)(d) and in open correspondence between them.<

>However, Lawton was at the receiving end of criticism from the late John Anthony West in 2000, when West published an article in Atlantis Rising magazine that ended with a scornful “The point is that the facile assurances given by Ogilvie-Herald/Lawton endorsing the orthodox view are illegitimate, their exclusion of contrary, genuinely informed opinion is typical of their selective bogus scholarship, and their long-winded acoustic levitation hypothesis is pure speculation and self-contradictory besides. We still don’t know how the pyramids were built/ Period. Full stop.”(e)<

Lawton has also been highly critical of the claims of the late Zechariah Sitchin(b) and his book Mesopotamia: The Truth [1751], he returns to the subject.

Lawton’s second book, Genesis Unveiled [1691], has been described as containing “remarkable new insights into the spirituality of the pre-flood human race”. Chapter 13 takes a somewhat generous view of Blavatsky and Theosophy(c).

He subsequently made changes(a) to the content and, in my opinion, opportunistically re-titled it as Atlantis: The Truth! In it Lawton has focused on prediluvian races, citing, with reservations, the work of Stephen Oppenheimer, Arysio dos Santos and Frank Joseph, which when added to Lawton’s research, he concludes that “it’s nevertheless interesting that all four of us have independently arrived at the same conclusion about the broad whereabouts of any forgotten race.” He argues that the location of such a race was in the general region of Sunda and Sahul Shelves.