Machu Picchu is generally accepted to have been an Incan retreat, built in the middle of the 15th century on a barely accessible mountaintop of Peru about fifty miles northwest of Cuzco. It was apparently abandoned a century later and only brought to the attention of the outside world in 1911 when it was rediscovered by Hiram Bingham III (1875-1956).

In 2021 the use of a more advanced dating method (accelerator mass spectrometry) has pushed back the earliest date for the site by a couple of decades to 1420 AD(j). 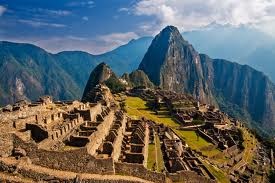 The siting of the sanctuary has been something of a mystery, Recent research suggests that the existence of geological faults that lie beneath it may offer some of the answers. Rualdo Menegat, a Brazilian geologist, presented a paper to the Geological Society of America’s annual meeting in Phoenix, in which he claims that the Incas deliberately chose to build Machu Picchu and some of their cities where tectonic faults meet!(h)

It was revealed in 2019 that work had commenced on the building of a new international airport to service Machu Picchu, a development that has been vigorously opposed as a threat to the already fragile site. It is worth noting that in 2017, 1.5 million visitors, nearly twice the limit recommended by UNESCO, came to Machu Picchu(g).

Also in 2019, it was announced that an even older Inca site was discovered 1,500 metres higher than Machu Picchu using LiDar(i).

>In March 2022, it was reported that “a new academic paper argues that since its rediscovery more than a century ago, the site has been known by the wrong name. A Peruvian historian and a leading US archaeologist argue that the Unesco world heritage site was known by its Inca inhabitants as Huayna Picchu – the name of a peak overlooking the ruins – or simply Picchu.”(l)<

Charles R. Kos expressed a belief “that Macchu(sic) Picchu in Peru which is held to be ‘Inca’ is in fact, I am fairly certain, an Irish Monastery from the Dark Ages.”(k)

(l) Machu Picchu: Inca site ‘has gone by wrong name for over 100 years’ | Archaeology | The Guardian *