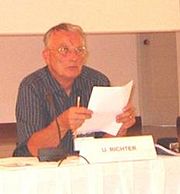 number of very interesting and cogently argued points in his essay [629.451]. He discusses the topographical details provided by Plato and concludes that the capital city of Atlantis was constructed on a river delta(b). He contended that the ‘circular’ canals were possibly an adaptation of existing natural features and provided good reasons to believe that the dimensions noted by Plato are incorrect as a consequence of confusion between the Greek stade and the Egyptian ‘khet’.

At the 2005 Atlantis Conference, Richter, when commenting on the Richat Structure, pointed out that it is too wide (35 km), too elevated (400 metres) and too far from the sea (500 km) to be seriously considered the location of Atlantis. [629.455]