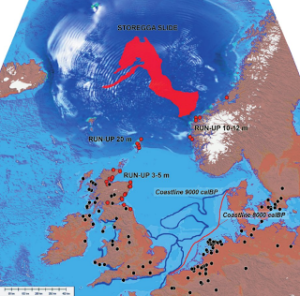 sedimentary deposits that were only recently identified. While many of these occurred following the melting of the glaciers at the end of the last Ice Age some more recent movements have also been identified. Either earthquakes or the decomposition of gas hydrates are their most likely cause. As many as three storegga have been identified that occurred off the west coast of Norway around 6000-5000 BC(a).  The combined volume of material involved in the last two events has been calculated at 1700 cubic kilometres. As a consequence, gigantic tsunami were generated which flooded a number of landmasses including Scotland. Ulf Erlingsson suggests that one of these events, around 6100 BC, may have been responsible for the final submergence of the Dogger Bank in the North Sea, creating the impassable muddy shoals mentioned by Plato.

The dating of these events is discussed by Bernhard Weninger and his associates in a 2008 paper available online(b).

Knut Rydgren and Stein Bondevik of Norway’s Sogn og Fjordane University have concluded that the flooding of Doggerland as a result of the Storegga event took place at the end of autumn(g).

The evidence to-date suggests that the flooding of the Black Sea coincided with a storegga event, which would require a catastrophe on a scale not previously considered. In a 2017 paper(e), John M. Jensen offers additional evidence to support this contention.

In 2014, Dr. Jon Hill revealed(d) the results of a study of the impact of the 6,200 BC Storegga on the low-lying Doggerland stating that “We were the first ever group to model the Storegga tsunami with Doggerland in place. Previous studies have used the modern bathymetry (ocean depth).” The study was commented on further by Axel Bojanowski in Der Spiegel with an English translation on the de Grazia website(f). The scale of the landslide is graphically described there.

In 2015 the UK’s Daily Mail offered further details(c) gleaned from articles in the respected journal Geology and Science Nordic.