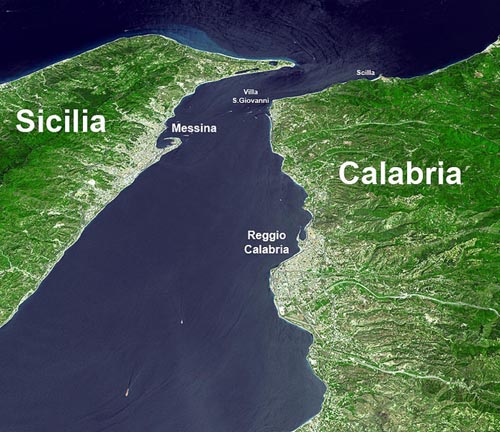 The strait is sometimes offered as an earlier site for the Pillars of Heracles prior to the Western Mediterranean becoming more frequently navigated by the ancient Greeks, at which time the term was transferred to the Strait of Gibraltar. Winfried Huf is a keen supporter of ‘Pillars’ having been located at Messina. A constituent part of the Western Mediterranean was the Tyrrhenian Sea, which, for the Greeks, would have been most easily accessed through the Strait of Messina.

>It is interesting that from around 330 BC and for nearly a thousand years(b) the Strait of Messina was known as Fretum Siculum, which translates as the Sicilian Strait. Philo of Alexandria (20 BC-50 AD)  in his On the Eternity of the World(c) wrote “Are you ignorant of the celebrated account which is given of that most sacred Sicilian strait, which in old times joined Sicily to the continent of Italy?” (v.139).<