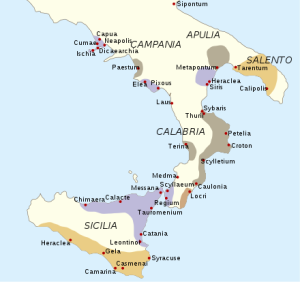 The Greeks began their gradual expansion westward between the 9th and 6th centuries BC, a development clearly illustrated on an excellent series of online maps(h). Understandably, they would have taken the shortest route from the Greek mainland to the heel of Italy and later on to Sicily. As they progressed with their colonisation new limits were set, and in time, exceeded. I suggest that these limits were each in turn designated the ‘Pillars of Heracles’ as they expanded. I speculate that Capo Colonna (Cape of the Column) in Calabria may have been one of those boundaries. Interestingly, 18th century maps shown up to five islands near the cape that are no longer visible(g), suggesting the possibility that in ancient times they could have been even more extensive, creating a strait that might have matched Plato’s description. On the other hand, the Strait of Messina was one of the locations recorded as the site of the ‘Pillars’ and considering that mariners at that time preferred to hug the coast, I would opt for the Strait of Messina rather than the more frequently proposed Strait of Sicily. A strait is defined as a narrow sea passage, a description that seems inappropriate for the 96 miles that separate Sicily from Tunisia.

It is also noteworthy that there are a number of towns in Calabria where ancient Greek is still spoken(i). Similarly, back on the Peloponnese, the language of Sparta, Tsakonika, is still spoken by about 2,000 people in an area limited to 13 towns, villages and hamlets located around the village of Pera Melana(j).