The Lipari or Aeolian Islands are located northeast of Sicily. The archipelago 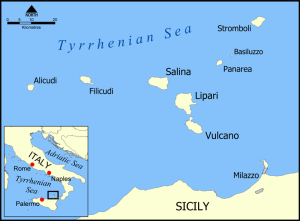 It appears that the claim by Jurikov may have been a hoax according to a report on the atlantisforshung.de website!(c)

Further information regarding the extent of this archipelago from the time of the Last Glacial Maximum is available on the mapmistress website(b).

Volcanic pumice from the archipelago has been identified as far away as Egypt and dates to the 18th Dynasty(a).

Vlaceslav Jurikov, a member of the Russian Academy of Sciences announced in 1994 that Atlantis had been located near the Lipari or Aeolian Islands off the northern coast of Sicily. He specified a point 15km from Cape Peloro at a depth of about 500 feet. This region is also favoured by Winfried Huf as the centre of the Atlantean sphere of influence.

He questions Plato’s report that Atlantis was submerged in a day and a night, suggesting instead that it was a much slower process allowing its inhabitants time to emigrate.

Jurikov further asserts that refugees from Atlantis fled to the Ukraine bringing with them the symbol of Poseidon, the trident, which is now found on the coat of arms of Ukraine.

>In 2015, the Atantisforschung.de website reported that evidence had emerged suggesting that Jurikov had never been a member of the Russian Academy of Sciences and that the whole Lipari claim was just an invention(a)!