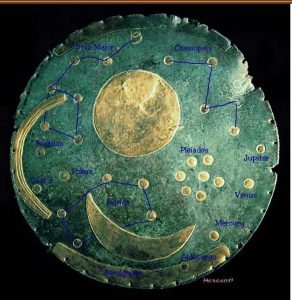 The reasoning behind this proposed dating revision is explained on The Archaeologist.org website “research published in 2020 by archaeologists from Goethe University Frankfurt and Ludwig Maximilian University of Munich casts doubt on this dating. After re-evaluating prior research and the circumstances of the disc’s discovery, the authors argue that the disc was likely not part of the cache of Bronze Age weapons, and therefore, cannot be dated with these artefacts. Instead, they assert that the disc should be evaluated as an individual find. The authors contend it bears hallmarks of an Iron Age item, and they place its origins instead in the first millennium BC. This younger age, they argue, would significantly change the sometimes far-reaching cultural and historical conclusions that have been attributed to the disc.”(p)

S.S. Jesmond was the name of the British ship that allegedly discovered and landed on an uncharted island in the Atlantic in March 1882. Captain David Robson went ashore with a landing party who claimed to have found a variety of artefacts, including “bronze swords, rings, and mallets, together with carvings of birds and animals…..and what appeared to be a mummy enclosed in a stone case.” Many of the finds including the sarcophagus were brought back to the ship.

The Times Picayune of New Orleans printed a report that it got from one of the sailors. The newspaper claimed that Captain Robson intended to present the objects brought on board to the British Museum on his return home.>The British Museum found no record of the Robson collection.(b)<

This whole story raises many questions:

(i)   The island has not been seen since

(ii)   In the competitive merchant-shipping world of the 1880’s no captain would waste two days exploring any island.

>As late as 1955, the story was still being recycled as probably true(a), but was finally debunked a year later, thanks to research by Lawrence Hills in the US(c).

Crystals and crystals skulls have been associated by numerous ‘fringe’ writers with the Atlantis mystery. Edgar Cayce started the ball rolling with his claim that the Atlanteans used crystals as a power source and weaponry. It must be pointed out that Plato never mentioned crystals in relation to Atlantis – a strange omission if they played such an important part in Atlantean technology and even more so if in spite of having this technology, they were defeated by the Athenians.

This twaddle has been compounded by F. A. Mitchell-Hedges, the alleged discoverer of the most perfect of the crystal skulls, when he wrote a couple of articles identifying Central America with Atlantis. His daughter, Anna Mitchell-Hedges (1907-2007), while the owner of the skull, went further and claimed that the skull has an extraterrestrial origin and was brought to Atlantis and then to its place of eventual discovery in Belize. A recent study of the Mitchell-Hedges skull indicates that it was manufactured using high-speed rotary equipment developed in the 19th century for jewellers. Studies of other skulls have produced similar results(f). Jane MacLaren Walsh, a Smithsonian anthropologist, has written a full account of tests carried out and the conclusions reached(h)(i). Her research revealed that “It appears that in 1936, nine to 12 years after the Mitchell-Hedges family claimed to have discovered the crystal skull, a London art dealer named Sydney Burney owned it. Further research showed that Burney sold his crystal skull to Frederick Mitchell-Hedges in an auction at Sotheby’s. With no record of the skull found before 1934, it appears the supposed discovery at Lubaantun was a fraud.”(k)

Another sophisticated crystal skull, named ‘Compassion’ has recently surfaced with an apparently African origin. The late Philip Coppens had written an article on its possible implication(d). A second piece(g) by Coppens offered further information. A website(e) dedicated to exploiting this skull has all the hallmarks of New Age nonsense starting with the name of the site itself – Atlanteanskull.com.

The nonsense written about Atlantis and crystals is epitomised by the drivel peddled by Zarin inter alia. Also far out on the lunatic fringe, we have Deanna Jaxine Stinson, who, among a collection of daft ideas, claims that “the ancient lost city of Atlantis is believed to have been destroyed by crystal skulls.”(j)

I must be blunt and state that crystals have as much to do with Plato’s Atlantis as the price of turnips in Bhutan. The internet offers many examples(a)(b) of the rubbish written on the subject. Fortunately, they are countered by more objective articles(c).

In late 2020, Discover magazine published an informative article about fake Aztec crystal skulls(l). The British Museum acquired a crystal skull in 1897 and since then has carried out a number of tests on it, which have all concluded that the skull was made in the 19th century in Europe and “was extensively worked with lathe-mounted rotary wheels (jeweller’s wheels), which were unknown in the Americas before the arrival of the Europeans.” (m)