Carl (Rod) Martin jnr. is an American writer/artist/philosopher living in the Philippines(a). He is currently working on a book, Mission Atlantis(b), along with a new website(g), in 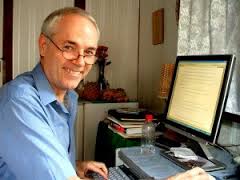 which he places Atlantis in the 10th millennium BC, with its location stretching from the Azores to near Gibraltar. He cites Plato’s comment [Critias 114b] that Atlantis faced Gadeira (Gades) generally accepted to be modern Cadiz. Martin offers a speculative map (see below) of his Atlantic Atlantis(f).

He ties in the demise of Atlantis with three prominent events, each recorded by a separate scientific discipline. One of these was the ending of the Younger Dryas.

However, he has a second book, The Noah Mystery(c), at a more advanced stage, which deals with the biblical Deluge and the ‘motivation’ behind it.

Martin has now a short video(d) posted on the Internet which graphically explains his theory.

In a 20-page pdf download(e) Martin concentrates on the geology of Atlantis. In it he also reaffirms support for accepting Plato’s date of around 9600 BC for the demise of Atlantis. While this view is shared by many, it does not explain the total lack of archaeological evidence to support the contention or Plato’s clear description of a Bronze Age backdrop to the war with Atlantis.

In 2019, Martin published Proof of Atlantis?[1623], which is a rather short book, but intended as a precursor to a more extensive work, Mission Atlantis, mentioned above. I disagree completely with Martin’s dating and location proposals and totally reject some of his weirder suggestions, such as mythological dragons being ancient flying machines and orichalcum as an alloy of uranium and copper!  The larger sequel has been gestating now for two decades, so I look forward to whatever ‘goodies’ that it will reveal.