Wales, or more precisely an area off the west coast of Wales, is considered by 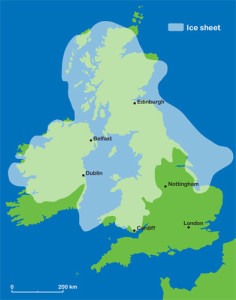 Paul Dunbavin to be the location of sunken Atlantis(c). His well researched books [099][101][1627]  investigate in detail the mythology of the region together with the underwater topography of the Irish Sea and relates these to Plato’s narrative. It is generally accepted that at the end of the last Ice Age, Ireland and Britain were joined and that the Irish Sea was a much reduced inland lake. As the ice melted the seas gradually advanced separating the higher land into what are now geographically known as the British Isles. A memory of these events is possibly contained in the ancient Welsh Triads(a), where reference to great floods can be found. However, Dunbavin’s attempt to link these floods with the inundation of Atlantis is not fully convincing. Similar floods occurred all over the world including the Baltic, Caribbean and Indonesia but in common with Wales there is no connection between any of them and a war with Athens or Egypt.

Nevertheless, in October 2004 the British newspaper,The Guardian, perhaps slightly tongue-in-cheek, compared some of Wales’ features with Plato’s description of Atlantis, although the reference to elephants ended the comparison (b).