Joseph S. Ellul (1920-2011) was a retired Maltese schoolteacher, who lived in Zurrieq near the ancient temple of Hagar Qim. As an amateur archaeologist he 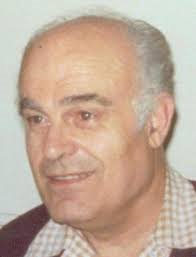 was of the opinion that Malta was part of Atlantis and that it was Noah’s Flood that inundated many of Malta’s prehistoric monuments, some of which are still submerged. Ellul’s family had been caretakers of the nearby ruins of Hagar Qim for many years, so he rightly claimed to have an intimate knowledge of the monument. He, together with Paulino Zamarro shared the idea that the collapse of a land bridge between Gibraltar and Morocco caused extensive flooding in the Mediterranean.

Ellul related how the megalithic ruins of Hagar Qim were once dated to around 10000 BC by a British archaeologist, whom he surmised to be the renowned V. Gordon Childe. In his book[289] Ellul put forward his argument for a catastrophic flood originating in the western Mediterranean and being of such speed and size that it caused severe damage to Hagar Qim. Since the temple is over 400 feet above sea level he concludes that this must have been the result of the breaching of an isthmus in the region of Gibraltar.

Ellul has also argued in a letter to The Malta Independent (7/10/2002) that the Hagar Qim temple incorporated a number of astronomical alignments(c). A number of attempts have been made to link the orientation of the temples with various astronomical bodies. A limited study by John Cox proposed a connection with moonrise(d). Mario Vassallo favours an association with the winter solstice sunrise(e). Klaus Albrecht also identifies [1632] the winter solstice sunrise as his preferred orientation(f). Lenie Reedijk offers [1631] a far more radical explanation for the alignment of all the temples, namely that they were directed at Sirius, the brightest star in the night sky at that time.

The only other possible cause might be a giant tsunami, which I have never heard suggested by anyone, although Charles Savona Ventura has written of a tsunami that was observed on Gozo in 1692 following a destructive earthquake, which are rare in the area. The sea receded about one mile before rushing back to add to the seismic damage. Unfortunately the height of the tsunami is not recorded but would have far less than the 130 meters of Hagar Qim.

Even if there had been no such land bridge, the lowering of sea levels with the onset of the last Ice Age would undoubtedly have resulted in Malta having a more extensive landmass that would have been flooded by the subsequent melting of the glaciers but not in the catastrophic manner indicated by the physical evidence.

Excerpts from Ellul’s book are available in English on the Internet(a). His opinions regarding Malta’s cart-ruts are of interest, if somewhat controversial, and can also be read online (b).