Richard Ellis is the author of a number of books on the oceans as well as being a distinguished marine artist. In his dissertation 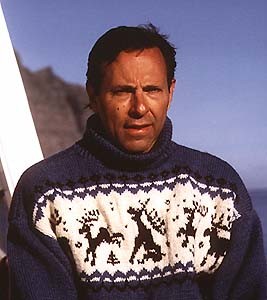 [288]on Atlantis he consigns Plato’s story to the realms of fantasy and he discusses the efforts of both serious investigators such as James Mavor and Jacques Cousteau and also the ramblings of spiritualists like Rudolf Steiner. He concludes that one group is simply misled while the other is misleading.

The greater part of the book is devoted to a discussion of the possible link between the eruption of Santorini in the second millennium BC and Atlantis. This, presumably, is due to the prominence that this particular theory had achieved in the popular media at that time..

Understandably, while sceptics have given the book an enthusiastic welcome, others have taken a more critical stance.

*Some years later, Ellis published Encyclopedia of the Sea, a comprehensive, but concise review of all things maritime, generously illustrated by the author.*