Atlantis from a Geographer’s Perspective

Atlantis from a Geographer’s Perspective [319] by Dr. Ulf Erlingsson, a Swedish geographer and geomorphologist, endeavours to identify Ireland as the original Atlantis described by Plato. As an Irishman, I would be delighted to support this view, if the evidence was strong enough. Unfortunately, I cannot see Erlingsson’s book advancing the case for an Irish Atlantis. I am willing to accept that the megalithic cultures of Western Europe and North Africa were probably part of a loose confederation of societies that led to a later tale of a mighty empire, as its existence was relayed through the myths of succeeding civilisations. However, to claim that 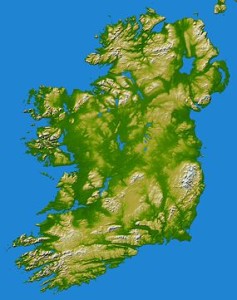 Ireland was the centre of this civilisation is rather fanciful and unsubstantiated by anything other than the fertile imagination of Dr. Erlingsson.

Erlingsson refers to Henry O’Brien’s book, The Round Towers of Ireland[0124] as a sort of precursor of his own. In fact, O’Brien’s book was an attempt to link the Round Towers of Ireland with a pre-Christian period. O’Brien never referred to Plato or Atlantis at all. Now after more than a hundred and fifty years, no evidence to support O’Brien’s claim has been forthcoming. There is a consensus that the round towers date from the early part of the first millennium AD, but it must be admitted that with regard to their purpose, some mystery still exists.

The most glaring flaw in Erlingsson’s theory is his arbitrary use of the diagonal dimensions of Ireland in order to shoehorn it into Plato’s dimensions. Using the island’s latitudinal and longtitudinal dimensions, a much smaller figure would have resulted. However, his application of Plato’s 3,000 x 2,000 stadia (550 x 370 km) to the entire island, is dishonest as Plato’s figures only refer to the plain of Atlantis, whereas the Central Plain of Ireland would only occupy a fraction of that area.

Some of my other reasons for dismissing Dr. Erlingsson’s theory are:

*Erlingsson, in order to explain the fact that Ireland was not submerged, has proposed that when the story of megalithic Ireland reached Egypt, it became confused with the tale of the inundation of Doggerland, which resulted from the Norwegian storegga event of around 6200 BC.*

My final gripe with the book, or should I say booklet, as it contains just a hundred pages, is that it lacks an index, an irritating omission that a number of authors reviewed here have also been guilty of.

On 19th August 2004, the respected The Irish Times newspaper, reported(c) that Erlingsson had appeared to backtrack on some of his initial claims when he said that “The existence of Atlantis has never been proven” and that “the purpose of his book was to test Plato’s claim that he based the utopia on a real, historic place.”

It’s over ten years since I read Erlingsson’s book and have only recently re-read it because the author wrote to me complaining that I had included inaccuracies in my original comments on his book. Having perused the first chapter again, I quickly realised that any shortcomings on my part were greatly exceeded by those of Erlingsson’s.

Firstly, he claims that Atlantis was Ireland, but the island which sank, referred to by Plato, was in the North Sea, part of Doggerland. He claims that the story of a sunken island was a tale from Atlantis, not about Atlantis! He attempts to explain this away by simply claiming that Solon/Plato made a mistake! It is far more likely that Erlingsson is making a mistake.

He then uses Doggerland to explain away the elephants that Plato said inhabited Atlantis, claiming that the remains of mammoths were reclaimed from the North Sea. However, he fails to record that the mammoths in question were dated at 40,000 BC(b), tens of thousands of years before Atlantis.*Nevertheless, there is now evidence that mammoths may have existed on Wrangel Island in the Arctic Ocean as recently as 2500-2000 BC(d)(e).*

My second complaint is that he initially matches the dimensions of the entire island of Ireland with those of the plain of Atlantis given by Plato, namely 3000 x 2000 stadia. I have already pointed out that if you remove the mountains from the Ireland, the remaining plains of our island, if combined, might amount to a third of that of the plain of Atlantis(a). In order to shoehorn Ireland into his hypothesis he abitrarily chose to use a value of 166m to the stade, instead of the more generally accepted 185m. On top of that, as already noted, he measured Ireland diagonally rather than north-south and east-west.

Furthermore, speaking of mountains, the highest Irish peak is only 1,038m high. On the other hand, Plato describes the mountains of Atlantis being renowned for their number, size and beauty, which apart from beauty cannot be applied to the modest Irish mountain ranges. I would expect better from a geographer.

The first chapter contains other errors, including the idea that the ancient Greeks knew of America. In fact they only knew of three continents, Europe, Asia and Libya (Africa). Herodotus, who flourished after Solon and before Plato, was quite clear that there were only three known to the Greeks. [Histories 4.42].

There are more speculative claims in this first chapter, but, at this point I could take no more and gave up, unwilling to waste any more time on this nonsense. Erlingsson claims that his hypothesis matches Plato’s Atlantis story with a probability of 99.98%. Hilarious.