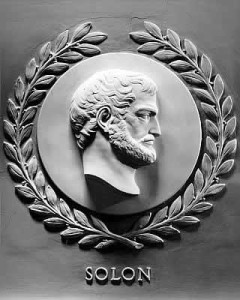 Solon (c.630- c.560 BC) was an Athenian archon (chief magistrate). His reputation rested on his legislative, social and monetary reforms, which contributed to an economic recovery and laid the foundation for the later emergence of democracy. Over time he was elevated to something akin to political sainthood, but not without some critics. For example, Kelcy Shannon Sagstetter of Pennsylvania University had produced a lengthy paper(c) in which she is content to label Solon’s methods as not unlike those of other tyrants of the period.

Although the story of Atlantis is normally attributed to Plato, the core of the narrative, namely the destruction of a powerful civilisation many hundreds, if not thousands of years earlier, through flooding, should be credited to Solon, whose ‘notes’ provided the basis for Plato’s work, allegedly based on the content of conversations with Egyptian priests at Sais and Heliopolis. The very detailed descriptions of matters such as the history, topography and fauna of Atlantis are probably later additions by Plato. It is highly unlikely that the Egyptians would have been concerned with the recording of such minutiae relating to their former enemies.

Many commentators doubt that an actual note of Solon’s conversations with the Egyptian priests ever existed, even though in Plato’s Dialogues Critias claims that these were handed down to his relatives. However, here again, we encounter a difficulty, in one place Critias [113b] states that he is still in possession of Solon’s notes, in another Timaeus [26a] he declares that he relies on his memory for details of the Atlantis story that his grandfather had told him and which he recited as a child, indicating that he was using two complementary sources.

It seems that Solon had intended to use the Atlantis story as the basis for an epic poem, apparently intended to rival the work of Homer. According to Plutarch, the fear of failing in his ambition held him back!

Reginald Fessenden in defending Solon against accusations of inventing the Atlantis story wrote “ As regards the theory that Solon himself might have invented it, we know Solon’s opinion of fiction. Moved by curiosity he went to see the first play, acted by Thespis. After it was over he called Thespis aside and asked him if he were not ashamed to tell so many lies before so many people. Thespis said there was no harm to do so or say so in play. Solon struck his staff vehemently on the ground; said ‘If we honor and commend this in play we shall soon find it in our business.’ Hardly the man to think his reputation would be increased by making up traveller’s tales”(e).

The Life of Solon by Plutarch is available on the Internet(a)(d).

Damien Mackey has made a half-hearted attempt to identify Solon with the biblical Solomon!(b)