Costa Rica is home to one of the great megalithic mysteries of Mesoamerica, namely its enigmatic stone spheres measuring up to 10 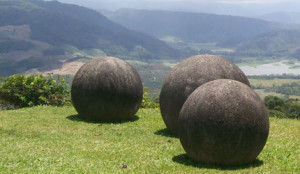 feet in diameter and 30 tons in weight. The spheres were discovered in the Disquis Delta region of the country but unfortunately few, perhaps six remain in their original positions. They number in excess of 300 and it is claimed that they are perfectly spherical to within a couple of millimetres. Ivar Zapp and George Erikson have linked[0244] these spheres with ancient navigational systems in a worldwide culture that included Atlantis. At best their suggested connection with Atlantis is somewhat tenuous.

Zapp gave a talk in 2005 in which he identified a location in southwest Costa Rica as the site of Plato’s Atlantis(b).

A more objective review by professor John W. Hoopes of the University of Kansas, of the Costa Rican stone sphere ‘mystery’ can be found on the World-Mysteries website(a).

>A 2022 report describes recent excavations Disquis Delta region aimed at conserving badly weathered spheres there, “the team focused on the Finca 6 archaeological site located in the canton of Osa in the Puntarenas Province, in which stone spheres have deteriorated due to alterations derived from the constitution of the rock, damage caused by humidity, and floods resulting from hurricanes and tropical storms.”(c)<