Trevor Palmer (1944- ) is an English Professor of Biology now living in Scotland. Apart from his day-job of enzymology and the study of genetic 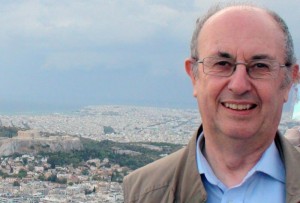 disorders, which led to an interest in evolution, which in turn brought him to research catastrophism, he has written several books on these subjects, including Perilous Planet Earth[888],  which places today’s “concern about the threat to Earth from asteroids and comets within a historical context.” He devotes two chapters of this comprehensive work to the subject of Atlantis, in which he reviews (chap.13) some of the late 19th and early 20th century theories as well as more recent developments (chap.28) exposing many of the weaknesses in the arguments on offer.

While Palmer does not express any personal views on the subject, it is noteworthy that he wrote an introduction to the 2005 Barnes & Noble edition of Lewis Spence’s The History of Atlantis. After a brief look at Spence’s life, Palmer gives an overview of the principal strands of Atlantology today and concluded that many of the issues debated 80 years ago are still unresolved and for that reason, Spence’s book continues to be worth studying.

Palmer wrote a short paper(a) in 1987 in which he was cautiously sceptical of the Atlantis story, particularly the possibility that it was destroyed during the Late Pleistocene era, with which I concur. He also touched on the subject of the Carolina Bays, apparently adding support to the now-discredited idea that they were created by wind action. I expect that he may have modified his views by now.>However, the US Geological Survey is now (2021) identifying the bay as ‘relict thermokarst lakes’.(h)

Palmer presented a paper entitled Catastrophes: The Diluvial Evidence at the Society for Interdisciplinary Studies (SIS) Silver Jubilee Conference in September 1999.(i) He also addressed the SIS in 2004 on the background to his book published the previous year(d).<

Palmer has written two papers(b)(e) on the history of catastrophism from the time of Velikovsky and the ensuing debates, until the present, when catastrophism has greater acceptance and which now offers a variety of competing ideas regarding the number, source, date and consequences of specific catastrophes.

Palmer has also written a 2018 review(c) of Perilous Planet Earth in the light of developments since it was first published.

Palmer and Gunnar Heinsohn have been debating Heinsohn’s claim that our chronology of the 1st millennium AD is deeply flawed, on the Q-Mag website(a). Palmer has also written a lengthy paper supporting his views(a).