Nabta Playa is a megalithic site situated 100 km west of Abu Simbel. It is the only known megalithic circle in Egypt, although in this instance ‘megalithic’ may be a misnomer as the components could have been erected by one person. A number of astronomical alignments have been identified at the site(a).

Although first rediscovered in 1974 by anthropology professor Fred Wendorf, it became known to a wider audience when astrophysicist Thomas G. Brophy published his book, The Origin Map[1510] in 2002. Wendorf was a contributor to a 2005 paper entitled Astronomy of Nabta Playa delivered to the African Astronomical History Symposium in Cape Town(g).

The importance of Nabta Playa was further highlighted in a 2010 book by Robert Bauval & Thomas G. Brophy, Black Genesis[1508]. In it, they argue that the dark-skinned creators of Nabta Playa were the ancestors of the Egyptian culture, who migrated eastward as the Sahara dried up. The book has been reviewed favourably by Bruce Jeffries-Fox(b) and very critically by Jason Colavito in four parts(c-f). This was followed in 2012 by another book from Bauval & Brophy, Imhotep the African[1509], in which they explore further the development of ancient Egypt, particularly the part played by Imhotep. 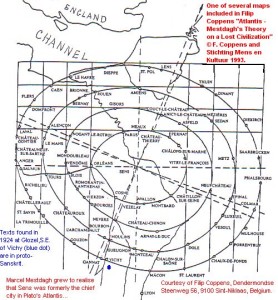 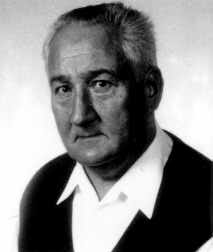 >In a 1997 lecture(f) Coppens said “I believe that the megalithic civilization was instrumental in creating and propagating certain knowledge about things we are only now beginning to realise…….I wholeheartedly believe the megalithic civilization unravel certain enigmas that the Great Pyramid and all the wonders of Egypt and Sumer combined will not be able to solve.” Unfortunately, Coppens did not elaborate on the enigmas that he was referring to.< 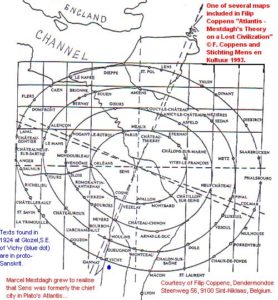 France was the centre of an ancient civilisation with its capital in the city of Sens. The late Philip Coppens discussed Mestdagh’s theories in two of his books[0240][1275],which in turn led to a two-part essay(f)(g) by Bruce Jeffries-Fox.

Another mysterious feature of ancient France is centred on the town of Alaise from which it was discovered that 24 radial ley lines emanated. These were identified by Xavier Guichard (1870-1947) a former Parisian police chief(e).>In 1936, he self-published the heavily illustrated Eleusis Alesia [1699] outlining his research in great detail.<

However, in the 1990’s Emile Mourey developed a theory which saw the Atlantean ‘Empire’ covering most of western Europe and all of north Africa as far east as Egypt. He places its capital at what is now the village of Gergovie(b) in the départment of Puy-de-Dôme. This Atlantis, according to Mourey, was not destroyed but after 509 BC was known as Gaul!

Brittany, in northwestern France is the centre of some of the most spectacular megalithic monuments in Europe. From the middle of the 20th century onwards a number of researchers have striven to link Atlantis with these remarkable structures. In which connection the work of Deruelle, Tristan, Helmut Tributsch and  Hank Harrison must be mentioned.