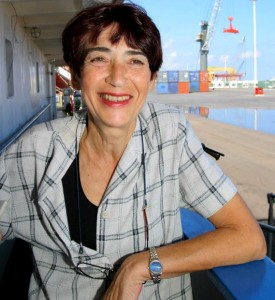 ” A two-page article appeared in the February 1952 edition of the magazine ECOS entitled  ’Formó Cuba Parte de la Atlándida?’. Written by Francisco Garcia-Juarez, the press secretary of the Instituto Cubano de Arqueologia (Institute of Cuban Archaeology, or ICA) it posed the question: did Cuba once form part of Atlantis? He explained how members of the Institute were investigating the idea that traces of an Atlantean culture might be found in Cuba and Hispaniola.”  This study had been prompted by a suggestion from Egerton Sykes(e).

In more recent years, it was reported that Paulina Zelitsky and her team of underwater explorers found formations, in 2000 feet of water off the western tip of Cuba that resembled submerged cities.

Although there was a widespread media reaction to Zelitsky’s discovery, many commentators drew parallels with Plato’s city of Atlantis. However, Zelitsky was unwilling to make such comparisons. The story is a myth, said Zelitsky.“What we have found is more likely remnants of a local culture”, once located on a 100-mile “land bridge” that joined Mexico’s Yucatan Peninsula with Cuba.

Although further explorations were planned it is reported that the U.S. government applied pressure to have any further funding denied. May 2013 had Zelitsky trying to revive interest in her theories in an interview with Luis Mariano Fernandez(d). However, in 2012, Andrew Collins offered a different account of the Zelitsky funding difficulties(g).

Andrew Collins is probably the best-known supporter of a Cuban Atlantis. His book[072] and website(a) list eleven points in favour of this theory. He contends that Cuba’s western plain, which stretches from Havana westwards to Pinar del Rio was the great Plain of Atlantis described by Plato. He believes that the main city was located near the present Isle of Youth (Isla de la Juventud) situated in the south of the island. In 2009 Norman Frey wrote a paper(b) supporting the Gulf of Batabanó which lies north of the Isle of Youth as Atlantis’ location at the end of the last Ice Age. He supports his contention with satellite images and the work of Dr Christine Pellech. Frey also claims that the two plains of Cuba match Plato’s description of the Plain of Atlantis(k).

A.R.E. is also a supporter of Cuba as a possible location for the capital of Atlantis. They have suggested an underwater ‘island’ at Zapata, located on the southern side of Cuba, north of the Isle of Youth and just to the west of the infamous Bay of Pigs. This ‘island’ is surrounded by a small ring of water and is about 7 miles in diameter, consistent with Plato’s description of the outer ring of Atlantis. A.R.E.’s Greg Little obtained old depth and bottom contour charts of the site and found that the island was comprised of a series of rings. Little also identified other features in the locality that match Plato’s story; ancient manmade canals north of the underwater island. These canals have been attributed to the Taino Culture, a mound-builder culture present in Cuba about 3,000 years ago that became extinct shortly after the Spanish conquest. Further north there is a mountain range enclosing the area with a wide river running at its base — a further match with Plato. Little also found that the centre of the underwater island is not only the tallest portion but also has several springs on it.

One completely off-the-wall suggestion has been that the Cuban Missile Crisis was instigated to prevent the Soviets from finding Atlantis(f)!!

Gerard W.J. Janssen of Leiden University places the voyages of Odysseus in the Atlantic(i). However, although he situates most of the places visited in the eastern Atlantic he does claim(h) that Homer‘s Laestrygonians were to be found in Cuba, an interpretation supported by both Théophile Cailleux and Iman Wilkens.

Luigi Usai has recently (2022) published a number of images purporting to show underwater anomalies off the coast of Cuba(j). As Usai has already designated the central region of the Mediterranean as the location of Atlantis I cannot understand his reason for showing such images. Similar anomalies have been found in various parts of the world and explained by Google as data-gathering glitches (see Satellite Imagery). If any of the rectangular features were city walls or streets they would have been kilometres wide – a nonsensical suggestion.