Baron René de Boucheporn (1811-1857) suggested in 1844 that the axis of the earth had been altered by an encounter with a comet. A few years later Frédérik Klee discussed this pole shift theory at length[794] but for his own part he favoured an internal force as the cause of any axial change. 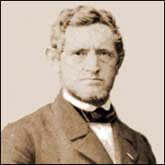