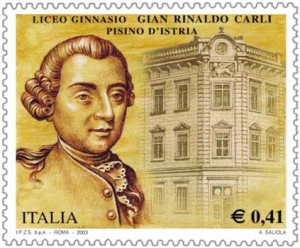 Giovanni Rinaldo Carli (1720-1795) was an Italian who had quite a diverse range of interests, from economics to ancient history to oenology.

In a book[087] concerning the history of the Peruvians he expressed his belief that a close encounter with a comet altered the orbit of the earth, lengthened the year and was responsible for the Deluge. A consequence of this catastrophic fly-by was also the destruction of Atlantis, which he located in the Atlantic, leaving the Azores and Canaries as its remnants today.

*Stephen P. Kershaw comments[1410.202] that where Rudbeck used the Atlantis story to support Swedish nationalism, Carli attempted to use it to enhance the prestige of his native Italy.*

His idea of a cometary interference with the earth is an extension of the theories of William Whiston (1667-1752), the Anglican priest who sought to reconcile science and religion. The French astronomer, Jérôme Lalande, developed Carli’s cometary ideas further.