Al-Biruni (973-1048) was born in what is now Uzbekistan and is considered by many to have been one of the greatest scientists ever. He is credited with having developed elements of what we would now class as the modern ’scientific method’.

>He wrote 146 treatises totalling 13,000 pages in virtually every scientific field. One of his most notable accomplishments was the near-accurate measurement of the Earth’s circumference using his own trigonometric method; he missed the correct measurement of 24,900 miles by only 200 miles. Unfortunately, al-Biruni’s works were never translated into Latin and thus did not have much influence beyond the Arabic world.(a)< 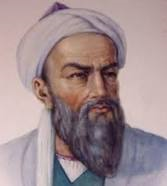 crater after him. Six centuries before Galileo, al-Biruni was aware of the fact that the earth rotated on its axis daily and circled the sun once a year.

Al-Biruni recalls an ancient tale which speaks of brackish land extending from Egypt to Constantinople suggesting that at some time in the very distant past, but still within the experience of man, that the eastern Mediterranean dried out. This idea was reinforced by the comments of al-Mas’udi and in the 12th century by al-Idrisi in collaboration with King Roger II of Sicily who all quote ancient traditions that clearly support the concept of a Gibraltar dam that was probably breached as sea levels rose at the end of the last Ice Age.