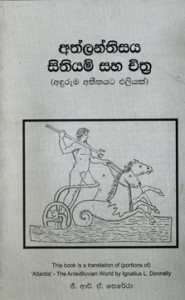 G.R.A. Perera is a retired Sri Lankan government translator. In 2014 he published the first translation of Ignatius Donnelly’s Atlantis in the local Sinhala language(a) – Athlanthisaya

Sri Lanka, or more correctly an area to the south of that island, has traditionally been associated with a large submerged civilisation known in Tamil literature as Kumari Kandam. The idea was recently given added impetus in an interesting Internet posting(a). The writer points out that the proto-Greeks came from India, bringing with them their language and other listed cultural attributes, including the tales of sunken landmasses in the region of Sri Lanka. The Sanskrit texts predate Plato with accounts of advanced civilisation in India. More interesting is writing of Panini, a 4th century BC, Sanskrit grammarian who records Greeks in India. This fascinating subject is most certainly worthy of further investigation.

It is not unreasonable to link this lost civilisation with the inundation of Sundaland further east around today’s Indonesia.