Theophrastus (372–287 BC) was a student of Aristotle, whom he eventually succeeded at the Lyceum, 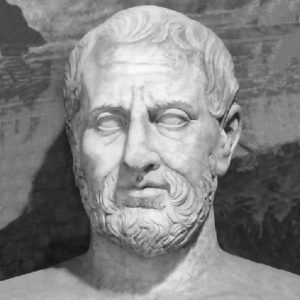 the home of the Peripatetic school of philosophy,*which he headed for thirty-six years. Eventually, he was succeeded by Strato of Lampsacus.*

Theophrastus is frequently quoted as referring to Atlantis having colonies in the ‘sea’. Philo of Alexandria in his De Aeternitate Mindi[1423] has cited Theophrastus’ belief in the reality of Atlantis. Thorwald C. Franke expands on this in Appendix F of his Aristotle and Atlantis[880].

Theophrastus is sometimes referred to as the ‘father of botany’ and was one of the earliest writers to note that trees gained an extra outer layer each year. However, it would take over two thousand years before this fact led to the development of today’s invaluable science of dendrochronology.