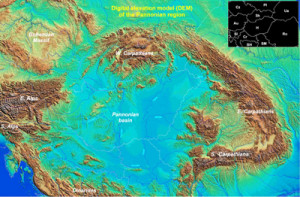 large feature in central and Eastern Europe that had been an inland sea in prehistoric times(b). It was formerly part of ancient Dacia. A paper was submitted to the 2008 Atlantis Conference in Athens by three Romanian researchers, M. Ticleanu, P. Constanin and R. Nicolescu proposing this region as the original location of Atlantis. This paper, together with a large number of maps, is now available on the internet(a).

The Pannonian theory should be studied in conjunction with the substantial work of Nicolae Densusianu who proposed in 1913 that the Pillars of Heracles had been situated on the Danube, as well as the more recent views of Ranko Jakovljevic who also proposes a Danubian solution to the Atlantis mystery.

However, none of them explain the Atlantean invasion of Egypt and Athens coming from the west (Tim.25b & Crit.114c) !  In fact what Plato said was that the invasion came from the Atlantic Sea (pelagos). Although there is some disagreement about the location of this Atlantic Sea, all candidates proposed so far are west of both Athens and Egypt. Furthermore, there is no evidence, or even hint of a suggestion, that any peoples in the Pannonian region had control as far as “Tyrrhenia and Egypt”. Consequently, this Pannonian theory conflicts with the only unambiguous geographical description of Atlantean controlled territory provided by Plato.