Ludwik Zajdler (1905-1985) was a Polish astronomer who published 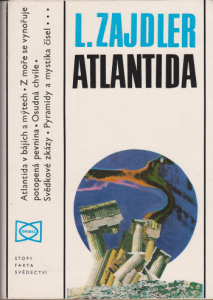 Atlantyda in Warsaw in 1963. In 1966 it was translated into Russian by leading atlantologist Nicolai Zhirov. It is widely quoted on the Internet that the 3rd Polish 1972 edition had a print run of 30,000 copies, which is unbelievably spectacular. However, this report goes on to claim that this number equals the total number of all books on Atlantis published in the USA and UK during the previous twenty years, which also seems questionable.

Zajdler divided his book into three sections, Atlantis in myth, Atlantis in history and the date and cause of its destruction. The author believed that there was evidence of a collision between the Earth and Halley’s Comet in 9570 BC and that this caused a 30° alteration to the axis of the earth resulting in the sudden freezing of the Siberian mammoths.

Zhirov noted[458.378] Zajdler had identified some remarkable similarities between the ancient Egyptian and Mayan calendars, which led him to conclude that they had to have a common origin that he assumed to have been Atlantis.

Zajdler also had a fascination with sundials and timekeeping, which led to him write Dzieje zegara (The History of the Clock).