August Hunt is an American freelance writer with a range of fictional and historical works to his name. His interests range across Arthurian literature, Celtic religion, mythology and folklore. 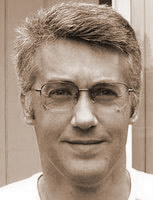 In 2008 he published a new Atlantis theory on the Internet in which he linked the Persian Empire with Atlantis, with either Persepolis or Susa as the capital city of the Atlanteans.*In 2010, he published The Real Moses and his God[747] and added A New Theory on Atlantis as a thirty-page appendix to it. The first is now available online(c), while his Atlantis theory has been published separately as a Kindle book[1413].*

Hunt argues that the 9,000 years since the Atlantean-Athenian War must be wrong since Athens did not exist until around 3000 BC. He then points out that the only conflict in which the Athenians defeated a large invading force was against the Persians at the Battle of Marathon in 490 BC. He strangely refers to the Atlantis story as a prophesy even though it was recorded by Plato over a century after the Battle of Marathon!

His most bizarre suggestion is that the 9,000 years quoted by Plato actually refers to the number of Athenians at the Battle of Marathon.

I was surprised to read(p138) that Hunt found “it odd that no one has thought to associate this geographical entity (Persia) with the Atlantis described by Plato”, since he was not the first to suggest a connection between the Persia-Athenian War  and the war with Atlantis. Pierre-André Latreille (1762-1833) the French entomologist did so in 1819 when he concluded[1018] that Plato’s tale was a distorted version of the war with Persia. William Henry Babcock (1849-1922) also suggested that Plato’s Atlantis story incorporated details of the defeat of the Persians.*Benjamin Jowett, held a related opinion. In 1953, the German classicist, Hans Diller, expressed the view that Plato’s Atlantis account was a fictional parallel with the Greco-Persian wars.*In 2007 the prominent sceptic, Pierre Vidal-Naquet, also saw parallels with the Persian war in Plato’s narrative[580].

*The Persian Wars took place between 500 and 449 BC, while Solon lived circa 630-560 BC, so it would not have been possible for Solon to refer to those conflicts in the Atlantis story that he brought from Egypt. We are therefore forced to conclude that Jowett and others were probably accusing Plato of lying about the provenance of the story, if not the actual contents of the narrative!*

Jim Allen who advocates a Bolivian Atlantis has also written an extensive article(b)  linking the Persian military details with the forces of Atlantis.

In view of all this it is hard to accept Hunt’s claim that he is the author of a new Atlantis theory.