Adamantia (Amanda) Laoupi (1968- ) is a Greek archaeologist(a) responsible for defining a new interdisciplinary field of study – Disaster Archaeology, which is concerned with a 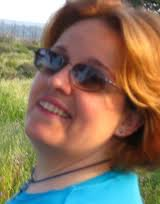 range of subjects that includes earthquakes, tsunamis, volcanic eruptions and asteroidal/cometary impacts, together with their local, regional and global effects. Laoupi has now expanded her views on disaster archaeology with the publication of her latest book, Pushing the Limits[1233].

A number of her papers are available on the Internet(f), one(b) deals with comets and diseases echoing some of the conclusions of Mike Baillie[892] as well as those of Fred Hoyle & Chandra Wickramasinghe. 2013 saw further evidence published that suggested that comets may have seeded life on earth(d). Additional confirmation came from data transmitted from comet Churyumov-Gerasimenko 67P in 2015 that revealed the existence there of sixteen organic compounds(e).

Laoupi has also touched on the subject of Atlantis in a technical paper on catastrophist mythology[0629.9] presented to the 2005 Atlantis Conference. In her Disaster Archaeology website(c) she has 14 discussion headings relating to Atlantis. Her conclusion is that the Atlantis story is a mixture of fact and fiction and perhaps is best related in her own words:

“The worldwide legend of Atlantis is a multi-layered ‘anthropological’ myth with strong cross-cultural parallels that echoes humanity’s experiences on mega-archaeodisasters, that had been filtrated through different symbolic languages. So, in this point of view, Atlantis as described by Plato, didn’t exist exactly as a whole, but as hidden information of different origin (chronological, topographic, environmental, archaeological, astronomical, etc), like the Homeric Epics and other famous literature of the ancient world.”