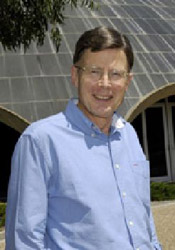 Kurt L. Lambeck (1941- ) is a Professor of Geophysics at The Australian National University in Canberra. He has carried out a study in many parts of the world of sea level changes and together with A. Purcell presented a paper to the 2005 Melos Atlantis Conference with the tantalising sub-title of “Was Atlantis on the doorstep of Athens”.

Lambeck particularly charts the reduction of the Cyclades from a landmass of approximately 160 x 85 km (13,600 km2)  to the archipelago we know today, which has an area of 2,572 km2.

He suggests that a memory of the break-up of this large landmass may have been the source of Plato’s Atlantis. His findings in the Aegean have been published in Antiquity[430] and maps of sea level changes, based on his investigations, are also available on the Internet. It is interesting to compare Lambeck’s findings with the theory of Paulino Zamarro who firmly places Atlantis in the Aegean.

Lambeck’s sea level data has been harshly criticised by Izabol Apulia(d), who has developed a large series of maps showing the ancient coastlines of most Mediterranean islands at various stages since the Last Glacial Maximum.

Lambeck has also studied the Persian Gulf and concluded that it had been a fertile valley that was inundated after the last Ice Age forcing the inhabitants to move inland and leading to the establishment of the intriguing Mesopotamian civilisations such as that of the Sumerians. This flooding of the Persian Gulf(b) may have inspired the Epic of Gilgamesh which contains a Deluge story, accepted by many, to be an earlier version of the Biblical flood of Noah. The December 2010 issue of Current Anthropology discusses this subject and suggests that the flooding of both the Persian Gulf and the Black Sea took place around the same time(c).

>In 2004, Jim Teller a geologist at the University of Manitoba and his team offered evidence for the inundation of the Persian Gulf at the end of the last Ice Age. The devastation that was caused to the communities could have inspired the flood stories found in early historical documents(a).<