Amber was known to the ancient Greeks as electron and ancient myth has it that it was first created when Phaëton drove across the heavens. In Germanic languages, it is called Bernstein meaning  ‘stones that burn’. Since ancient times, it was brought from northern Europe to the Mediterranean. Jürgen Spanuth[002.47] was convinced that amber was in fact the orichalcum that Plato claimed to have adorned the walls of Atlantis. Spanuth’s theory is based on the fact that amber was mined in large quantities in the Baltic region as well as 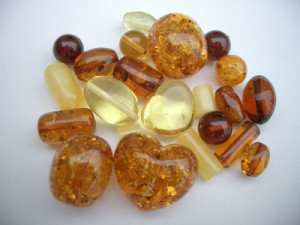 Eiderstedt opposite  Heligoland where he was convinced that Atlantis had been located. In ancient times amber was second only to gold in value. Although Spanuth’s location theory is carefully argued and was initially well-received, it has received diminishing support in recent years.

My initial reaction to the idea of amber as orichalcum was one of incredulity, but this was somewhat assuaged when I read the following comment in Helen O’Clery’s book “It was well known to the ancients that amber could be liquefied by heat and that by adding oil was possible to use it as a paint”[494.52]. Spanuth also noted this use of liquid amber[017.92].

Ellis Peterson notes(b) that an Egyptian tomb inscription records that around 1500 BC the Haunebu, claimed by him to be the (North) Sea Peoples sent a gift of 8943 pounds of amber to ThutmosesIII. There were a number of amber trade routes between the Baltic and the Mediterranean, dating as far back as the middle of the fourth millennium BC indicated by beads found in pharaonic tombs.(f) Traffic was apparently two-way as Egyptian beads from 3,400 years ago have been discovered in Denmark and thought “to be from the workshop that made the blue beads buried with the famous boy-king Tutankhamun.” (g)

Amber is not exclusive to the Baltic and can be found in the Americas, Lebanon, Siberia, Australia and Japan(i). However, 90% of amber comes from the Russian Baltic enclave of Kaliningrad(i). A highly prized blue-tinted amber is found in the Dominican Republic(c). While Baltic stocks of amber have diminished, it was reported that in 1966, Dominican miners, in less than ideal conditions, extracted 4,000 pounds of amber every month(h). Today, Myanmar (Burma) is the leading source of amber, where in even more appalling conditions, 10 tons of it are recovered every year.

Frank Joseph in an effort to support his speculations regarding the mythical Electra claims[636.109] that the Atlantic islands of the Azores, Madeira and the Canaries are one of the two major sources of amber. This is blatantly untrue, as revealed in a comprehensive website(a) by Susie Ward Aber, a mineralogist at Emporia State University, Kansas. Amber sources worldwide are listed, but nothing in the Atlantic. Mr Joseph has some explaining to do.

In August 2018 a paper from the University of Cambridge published in Plos One offered evidence that amber found in Iberia had come from Sicily two thousand years before Baltic amber reached the Mediterranean. It also appeared that the Sicilian amber had not been traded directly with Iberia but had been routed through North Africa.(e)

A report in 2010 revealed that the 3,550-year-old skeleton of a teenage boy discovered 5 km from Stonehenge was adorned with an amber necklace, indicating his high status and perhaps just as interesting was that a study of his teeth revealed that he had come from the Mediterranean(d).

Over three thousand years later the King of Prussia presented Peter the Great of Russia with an Amber Room which was eventually installed, using 100,000 pieces, in the Catherine Palace in Pushkin near St. Petersburg. It was looted by the Nazis during the war and was never found again, although still thought to be somewhere in Germany. Nevertheless, a replica was reconstructed and after 25 years was opened to the public in 2003. It required $11 million to reproduce what was once described as the “Eight Wonder of the World”