The Mediterranean Sea is at the heart of the Atlantis story. Solon brings the tale back from Egypt to Athens and relates how the Atlanteans controlled the Mediterranean as far as Tyrrhenia and Egypt. The Atlanteans attack Athens and Egypt. Although the Pillars of Heracles are now generally believed to have been located at the Strait of Gibraltar, a number of other locations in the Mediterranean are known to have been similarly designated at different periods. As I have argued elsewhere, the Pillars of Heracles were undoubtedly a designation for the Strait of Gibraltar from the time of Eratosthenes, there is clear evidence that it was applied to other locations in earlier ages and probably over time, it became a metaphor for the limits of Greek maritime knowledge. 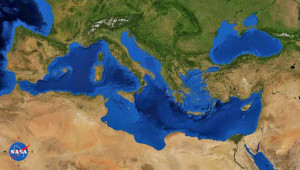 I may be the first to claim here that modern studies of Homer’s Odysseus offer a possible argument in favour of a Central Mediterranean Atlantis. Armin Wolf, the German historian, has made a 40-year study of 80 theories regarding the route taken by Odysseus. Around 30 of these included maps, a number of which are included in Wolf’s book, Homers Reise: Auf den Spuren des Odysseus[669], a shorter version in English, including maps, is also available as a pdf file(a). It is obvious that although a reasonable degree of agreement exists between many of the theories regarding the position of the twelve specific locations recorded by Homer, those that confine the ‘wanderings’ to the Mediterranean, consistently keep all locations in the eastern basin and Central Mediterranean with the sole exception of the inclusion of Gibraltar which looks out of place on maps,>with apparently nothing happening on the way there or on the return trip.< Wolf’s carefully thought out route does not include Gibraltar and in my opinion is a better reflection of actual Greek seafaring knowledge and naval capabilities at that time and adds a further suggestion, however inconclusive, that the Pillars of Heracles were situated in the Central Mediterranean. Wolfgang Geisthövel follows Wolf’s conclusions in Homer’s Mediterranean[1578].

Today’s leading theories regarding the location of Atlantis are virtually all related to the Mediterranean region. Between Morocco in the west and the Black Sea in the east there is an embarrassment of suggested locations.

The principal objection to a Mediterranean location for Atlantis is frequently claimed to be the apparent physical extent of the island as described by Plato, which if accepted as written, could not have fitted anywhere in that body of water. He gives us measurements for the plain adjacent to the city as being 240×360 miles. However, it is widely agreed that most of Plato’s dimensions are highly suspect and exaggerated by as much as a factor of ten.

On the other hand if Atlantis had been located outside the Mediterranean it is difficult to understand how the disaster that destroyed Atlantis could also have devastated Athens and its hinterland when the two locations would have been over 1700 miles apart. No single known natural disaster, such as an earthquake, could have affected the two cities at the same time. So if they were destroyed concurrently we must conclude that the two locations were situated in the same region and since Athens was clearly in the Mediterranean so must Atlantis. However, Plato does not explicitly say that the two armies were destroyed at the same time, although it seems to be implied.

As stated in the Invasion entry, all ancient empires expanded through the invasion of adjacent territories and so there is no good reason to think that Atlantis’ attack was not launched against an Athens that was within easy striking distance. This proximity could possibly explain the inference that Atlantean and Athenian armies were destroyed simultaneously by some natural catastrophe!

(1) Herodotus tells us that the ancient Greeks only knew of three continents, Asia, Europe and Libya (Africa) (Hist.4.42).

(2) Plato never called Atlantis a continent but consistently referred to it as an island.

(3) Finally, Herodotus also describes Sardinia as “the biggest island in the world.” (Hist.6.2)**, confirming a lack of knowledge of the world beyond the Mediterranean.

These three details taken together offer a compelling argument in favour of a Mediterranean Atlantis.

** Sicily is in fact larger in terms of area (25,708 v 24,090 km2). However, the coastal length of Sardinia is much greater than Sicily’s (1843 v 1115 km). Felice Vinci recently explained[019] how ancient seafarers measured territory by its coastal perimeter rather than by its area, as we do today. So Herodotus was correct according to the conventions of his day.