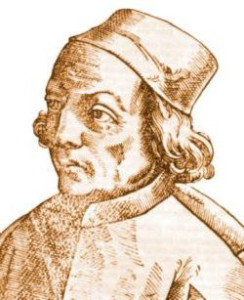 Marsilio Ficino (1433-1499) is not a name with instant recognition today, although most of us are familiar with the phrase ‘platonic love’, which was coined by him. However, it is largely due to his efforts that we are aware of Plato’s Atlantis story. He was the first translator of Plato’s complete works into Latin in the 15th century, while under the patronage of Cosimo di Medici. Unfortunately, the original Greek documents used by him are now lost. It is claimed that a comparison of Ficino’s translation with that of the partial translation by Chalcidius’ of Timaeus reveals a somewhat casual approach on the part of both men, a possible source of some of the problems encountered in the search for Atlantis.

Ficino was a Florentine priest who was a leading light of the Italian Renaissance. He is reputed to have had a prodigious knowledge of the ancient world and in particular early Greek and Egyptian religions. The late Philip Coppens contended(a) that Ficino believed that Christianity was in fact a development of earlier belief systems including the ancient Egyptian cult of Serapis.

Ficino also entered into an arrangement with his close associate Michael Mercator that whoever died first would give a sign to the survivor that there was an afterlife. Ficino was first to depart and allegedly did give such an assurance to his friend(b)