Ulrich Hofmann was born in Kronberg, Germany in 1967. He studied physics at the Marburg University and is currently working at the Forschungsinstitut.

He had been studying the Atlantis question for some years and published Platons Insel Atlantis [161] outlining his theories as well as presenting them to the 2005 Atlantis Conference [629.361]. After the publication of Hofmann’s book, Thorwald C. Franke wrote a critique, which is intended as a refutation of Hofmann’s hypothesis(b).

There is a pdf file, in English, available on the Internet(a) giving a summary of his views.

He supports the idea of Atlantis as a Bronze Age city  located in North Africa. He believes that the Chotts in what are today Algeria

and Tunisia originally constituted the Lake Tritonis of Greek legend and was also known as the Atlantic Sea and connected to the Mediterranean at the Gulf of Gabés, where the Pillars of Heracles were situated.

He also points to an ancient people, the Temehu or Tenehu who ruled North Africa up to the borders of Egypt. He believes that those Tehenu were in fact Atlanteans and the ancestors of today’s Berbers.

Hofmann’s theories is similar in some respects to the views of Alberto Arecchi and the beliefs of this compiler. 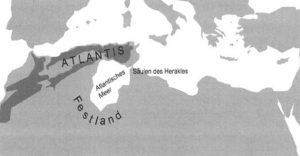