Josef Karst (1871-1963) was a German orientalist,  who became a professor of oriental philology at the University of Strasb 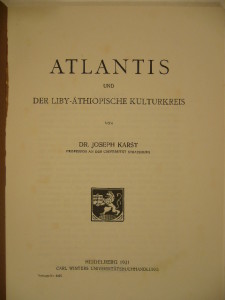 Not too much is known about his life and work, although he is possibly more remembered for his 1931 book, Atlantis under liby-äthiopische Kulturkreis [422], in which he expressed the view that there were two Atlantises, one in North Africa and the other in the Arabian Sea between India and what is now Iran. His ideas were based on his rather eccentric linguistic ideas.

>A more extensive review of his Atlantis theories can be found on the atlantisforschung.de website(a).<