Ragnarok: The Age of Fire and Gravel

Ragnarok: The Age of Fire and Gravel [022] by Ignatius Donnelly, who took the title of his book from the word ‘Ragnarök’, which in Scandinavian mythology describes the destruction of the world of men and gods. He claims 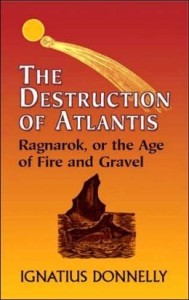 to have written this 450-page book in seven weeks in 1882. Some later editions have misleadingly added The Destruction of Atlantis to the original title, as Atlantis is only peripheral to the subject in a book title will always help to inflate sales.

>A number of contemporary press reviews of Ragnarok when it was originally published have been made available on the Atlantisforschung website(e).<

Coincidentally, just two centuries earlier Edmund Halley had also speculated that a cometary encounter with the Earth had led to the biblical Deluge(d). William Whiston offered a related theory[1162].

Donnelly seems to have anticipated the work of Immanuel Velikovsky when he wrote of a close encounter or actual impact with the Earth by a comet. He presents an array of geological evidence to support this contention. In addition, he proposes that this celestial clash is also a displacement of the poles. Again this is an idea that was taken up by a number of writers in the succeeding century and is still strongly supported today. Like Velikovsky, Donnelly postulated that the resulting catastrophes were recorded in mythology and biblical texts. One of the specific consequences of this encounter was the destruction of Atlantis, which he expanded on in his previous book, Atlantis, concerning Plato’s sunken civilisation. Both of Donnelly’s books are available on the Internet(a).

The catastrophism of Donnelly’s Ragnarok can be seen as anticipating aspects of the more recent theories of Richard Firestone and his colleagues that have come to be known as the Younger Dryas Impact Hypothesis (YDIH).

In 2013 experts in Norse mythology announced that a Viking apocalyptic ‘Ragnarok’ was due on February 22nd 2014! (b) The claim, which I suspect was a publicity stunt, was downplayed on February 23.

(a) Ragnarok: The Age of Fire and Gravel Index (archive.org)