Paul Dunbavin (1954- ) is a data and business analyst. “His interest for over 35 years has been cross- 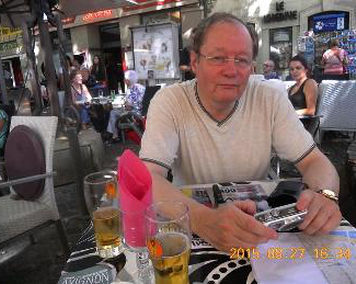 disciplinary research into prehistory, which he has occasionally published in his books and various articles and papers.”

He is the author of controversial but well-researched books relating to the ancient history of Britain. In one of these[100], he identified the Picts of Scotland as being originally from the Baltic. In another[099] he investigated the possible origins of Plato’s story of Atlantis. Using mythological, geological and archaeological sources he concluded that an asteroid or comet collided with the Earth around 3100 BC resulting in the tilting of the Earth’s axis. Dunbavin argued that this impact caused dramatic climate and sea-level changes that led to the submergence of a Neolithic civilisation on a low-lying plain off the coast of Wales. He believed that this destruction was the inspiration for the Atlantis legend. David Furlong claimed to have independently arrived at the same conclusion[285].

In 2005, Dunbavin published another volume[101] on ancient catastrophes and their possible connection with cometary impacts or near-collisions. In this connection, he briefly refers to the work of George F. Dodwell.

>Paul Dunbavin in his Atlantis of the West [0099] proposed that the Coligny Calendar might be considered a lunisolar calendar. Some years later in 2005 he returned to the subject in Under Ancient Skies [0101] and devoted Chapter 5 plus Appendices A & B to a discussion of Critias 119d, which relates how the kings of Atlantis met alternatively every five and six years. Dunbavin suggests that this is reflected in the Coligny Calendar and that it possibly had antecedents that would bring its functions back to the time of Bronze Age Atlantis(d), if not earlier(e). Dunbavin’s reaction to the Calendar is best quoted – Now it is this passage more than any other that convinces the present author (Dunbavin) of the authenticity of the Atlantis myth“. He touches on this matter again in Towers of Atlantis [1627] and Prehistory Papers [1758].<

Once again, Dunbavin has returned to the subject of the British Isles during the Neolithic period and their possible association with Plato’s story of Atlantis. He draws on the ancient Egyptian concept of a paradisaical afterlife comparable with the Greek ‘Elysian Fields’, both believed to be located in the far west. These notions are seen by Dunbavin to have possible parallels in Plato’s description of the Plain of Atlantis.

The author highlights the value of mythology, which he employs in conjunction with classical writers such as Herodotus, Diodorus Siculus as well as others to lead us to his considered belief that the Irish Sea before its eventual inundation after the last Ice Age had been home to the Plain of Atlantis, stretching from the island of Anglesea to the Isle of Man. This book should be read in conjunction with his previous offering, Atlantis of the West. Rather than wild speculation, Dunbavin has again offered evidence, although subjectively interpreted, which offers a coherent hypothesis.

Dunbavin updates his website from time to time, the latest was November 2019. Anyone interested in his theories should check his site regularly.

In 2020, Dunbavin published Prehistory Papers, “which provides a permanent repository for the various articles or papers originally published on the author’s website; together with some older articles; they expand on the cross-disciplinary research in the author’s earlier books.“