Eugene Bodichon (1810-1885) was a French physician and anthropologist who wrote in his 1847 book Études sur  l’Algérie[0991] that “the Atlanteans among the ancients, passed for the favourite children of Neptune, they made known the worship of this god to other nations.” This has been interpreted by commentators, such as Robert Stacy-Judd[607.63], as a suggestion that the Atlanteans were the first known navigators.

Ignatius Donnelly quotes Dr. Bodichon as identifying the Atlanteans as the inhabitants of the ‘Barbary States’ or the Berber Coast of North Africa and that in turn the Berbers were related to the Bretons of ancient Armorica, who should also be considered Atlantean.

Armorica was the Latin name given by the Romans to what we know today as the Brittany peninsula. The region contains some of the most remarkable monuments created by the megalith builders, such as those found at Carnac and Morbihan, 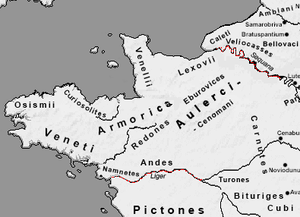 Plato described the influence of Atlantis reaching as far as Italy and Libya (Tim. 25b). In Europe megalithic structures have been found extending all along the Atlantic seaboard and into the Mediterranean as far east as Italy(a) and all across North Africa including modern Libya and Egypt, it was understandable when some commentators concluded that these megalithic monuments were a cultural expression of the Atlanteans. The evidence available indicates that the spread of megalithic building was effected by a maritime based society. How much of this spread was brought about through military or trade expansion or just migration  is not known.

A number of French and German researchers have identified Brittany as the power centre of the Atlantean ‘confederation’, while the American writer Hank Harrison is working on a book in which he will nominate Morbihan as a possible capital of Atlantis. R. Cedric Leonard has also written an interesting article(b) on the megalithic monuments of Brittany.

While megaliths are also found in the Middle East and across Asia as far as Japan, their greatest concentration is in Western Europe with a suggested focal point in Armorica. The legendary sunken city of Ys, often associated with Atlantis, is reputedly located off the coast of Armorica.