John Anthony West (1932-2018 ) was born in New York City and was often referred to as a maverick Egyptologist. The principal reason for this soubriquet was his contention[452] that the Sphinx is far older than conventionally accepted. He was greatly influenced by the writings of R. A. Schwaller de Lubicz who was the first to question[449] the date of the monument based on what he considered extensive water erosion that could only have occurred many thousands of years earlier than the establishment view. It was at 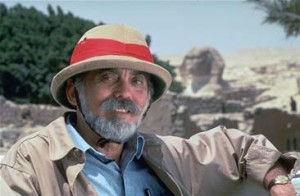 West has also questioned[453] the age of the Osirion at Abydos dating it back to 10,000 BC or earlier. He is convinced that a more ancient Sphinx and Osirion raises the question of a lost civilisation at the end of the last Ice Age(d) that may have been the Atlantis of legend. In an interview some years ago he revealed that “I’m very careful to use ‘Atlantis’ in inverted quotes, as, let’s say, a name applied to some lost civilization.”(c) However, he supported the idea of Atlantis without specifying a location, declaring, “Given all this evidence, ‘Atlantis’ can no longer be ignored by anyone seriously interested in the truth.” [0452.230]

In the Preface to West’s Serpent in the Sky, Peter Tompkins wrote that “interestingly, West develops de Lubicz’s notion that the Egyptian cosmology and understanding of this universe was not endemic to Egypt but came from colonists or refugees from Plato’s sunken continent of Atlantis, which could also explain the similarities and identities with the cosmologies of Central America, presumably brought there by other refugees from Atlantis”!

In the same volume West commented “Following an observation made by Schwaller de Lubicz, it is now possible virtually to prove the existence of another, and perhaps greater civilization ante-dating dynastic Egypt – and all other known civilizations – by millennia. In other words, it is possible to prove ‘Atlantis’, and simultaneously, the historical reality of the Biblical Flood.” [452.14]

In the first issue of Atlantis Rising magazine (Nov/Dec 1994) Dr Joseph Ray offered a review of Serpent in the Sky and by extension the work of de Lubicz. In the same edition(c), Douglas Kenyon interviews West headlining the article with ‘John Anthony West is producing the kind of hard evidence for ‘Atlantis’ that scientists find difficult to ignore.’

Apart from his non-fiction output West has written a book of short stories, a novel, plays and film scripts. His TV documentary on the Sphinx won acclaim in the UK and USA. West also maintained a website(a).

West and Robert Schoch had formed a documentary production company, Akio Enterprises, that had a number of projects in the pipeline.

In January 2017, it was announced that West was suffering from Stage 4 cancer. Although he won his fight against cancer, his body had been badly weakened and on February 7th 2018, his death was announced(b).

There is now a website headed the Official Site of John Anthony West(e). At the end of the biography, there is one final interesting comment “A dear friend and colleague of West is working on a three-volume comprehensive update of JAW’s research, including a section on Gobekli Tepe. It is entitled: John Anthony West: Symbolist View of Egypt by John Anthony West and the companions of Horus. The first volume is expected to come out later in 2022.”