Charles Vallancey (1721-1812) was a military surveyor in the British Army eventually holding the rank of general. He was sent to Ireland where he eventually settled. He was also an antiquarian who took great interest in the history, 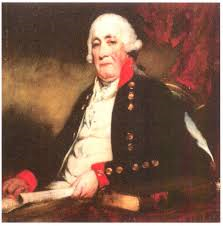 language and mythology of his adopted country. He published a number of book on the subject which have been heavily criticised for both their content and style. He voiced the opinion that the Phoenician and Irish languages were related!(a).

Although Valancey made little reference to Atlantis, James McCulloh noted [1588] that Vallancey was disposed to support John Whitehurst’s association of the Giants Causeway, in Northern Ireland, with Atlantis.

William Comyns Beaumont (1873-1956) was a British journalist, author and the uncle of the novelist Daphne Du Maurier. He is frequently referred to as an eccentric and not without reason. He published an extraordinary book, Britain – The Key to World History [088], in which he claimed among other things, that Edinburgh was the original Jerusalem, London was Damascus and rather worryingly that Bristol was Sodom (see map).

Beaumont located the Pillars of Heracles at Northern Ireland’s Giant’s Causeway along with its counterpart on the Isle of Staffa in Scotland(h). This suggestion was revived(k) nearly twenty years ago by veteran forum contributor ‘Jameske’ and more recently by Marco Goti. This identification has now also been adopted by Alberto Majrani(i). However, the first to associate the Giant’s Causeway with Atlantis was probably John Whitehurst (1713-1788)(j). James McCulloh (1793-1870) noted [1588.30] that General George Vallancey was disposed to support Whitehurst’s association of the Giant’s Causeway with ‘lost Atalantis’.

In addition, Beaumont was convinced that 18th Dynasty Pharaohs ruled the Welsh Britons. The foreword to the ‘Key’ is available online(d) as is a 1949 newspaper review(e).

In 1975, the American psychologist, Robert Stephanos (1925-2011)(c), founded the Comyns Beaumont Society in Philadelphia. Stephanos appears to have accepted Beaumont’s ideas including their more bizarre elements. In 1994 Stephanos published an article in Fate magazine(f), in which he also claimed that Velikovsky had ‘borrowed’ many of Beaumont’s catastrophist ideas.