Sodom & Gomorrah along with Zoar, Admah and Zeboim constituted the Cities of the Plain referred to in the Bible and believed to have been situated in the Jordan Valley before their obliteration (apart from Zoar) in a catastrophic episode during the 2nd millennium BC. Explanations, religious and rational have been offered to explain the event. My preferred explanation is that an encounter with an extraterrestrial body such as a comet or asteroid caused the devastation(d).

In 2008, a Sumerian clay tablet, known as the ‘Planisphere’ in the British Museum, was, after 150 years, translated and claimed to record an encounter with an asteroid ‘suspected of being behind the destruction of Sodom and Gomorrah(e). The late Bernhard Beier has written an interesting article on the Atlantisforschung website about this asteroid.

“Interdisciplinary findings by scientists at the University of Bristol in 2008 suggest that the destruction of Sodom and Gomorrah described in the Old Testament may have been the result of a serious impact event. 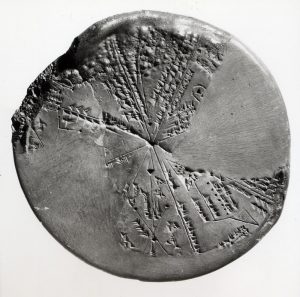 identified as the transcript of an eyewitness account of an asteroid impact that is believed to have also destroyed the cities of Sodom and Gomorrah. This clay tablet had already been discovered by Austen Henry Layard in the ruins of the library of the royal palace at Nineveh in the mid- 19th century. It is generally assumed that this specimen dates to around 700 B.C. It is a copy of a much older tablet on which a Sumerian astronomer wrote down his extraordinary observations of the sky. An ‘approaching, white stone ball’ is described there, which is said to have ‘rushed past violently.'”(l)

In October 2015, there were reports that the sites of Sodom and Gomorrah had been finally located(a). November 2018 saw a further claim(b) that Sodom and possibly other the ‘cities of the plain’ had been destroyed by a meteoric airburst, similar to the Tunguska or the more recent Chelyabinsk events. This catastrophe took place north of the Red Sea in what is now Jordan, according to archaeologist Phillip Silvia of Trinity Southwest University in Albuquerque(g).

Silvia’s conclusions have been confirmed by Dr Steven Collins(c), dean of the College of Archaeology at Trinity Southwest University, who has excavated at the Tell el-Hammam site over sixteen seasons(n). He describes his findings in his book co-authored with Dr Latayne C. Scott, Discovering the City of Sodom [1625].

A September 2021 paper(h) outlines interesting new evidence that the destruction of the Tell el-Hammam site was probably caused by a Tunguska-type airburst and further suggests that “about a minute later, 14 miles (22 km) to the west of Tall el-Hammam, winds from the blast hit the biblical city of Jericho. Jericho’s walls came tumbling down and the city burned to the ground.”

Jason Colavito added some further comments on the authors and background to this paper and concluded that “In short: The claim Tell El-Hammam was destroyed by an airburst is disputable. Its identification with Sodom is unproved and dubious, and no one has provided any evidence that an event supposedly transpiring in 1600 BCE was preserved accurately down to the composition of the first written account of Sodom in the surviving Genesis narrative, typically ascribed to the period around 500 BCE or later. If we can’t agree whether the Greeks preserved any real history from the Mycenaeans after only five centuries, we should be very careful in imagining the preservation of stories for two or three times that long with no evidence of intermediary versions.”(j)

The original report appeared on the Nature website and so far over a quarter of a million people have accessed it. This lengthy document can also be read on the cosmictusk.com website(k).

>Andis Kaulins has suggested that the destruction of the cities of the plain was a consequence of the eruption of Thera(p). David Rohl in The Lost Testament [231.180] has dated the destruction of Sodom to circa 1830 BC following a period of unheeded seismic warnings that eventually led to the rupturing of the earth and the violent ejection of deadly sulphur.<

More imaginative commentators, such as Dan Sewell Ward (1940-2019) have proposed(f) that the destruction of S & G was the result of atomic warfare!

In Atlantis and Other Lost Worlds [1535], Frank Joseph claims that Comet Encke in 1198 BC “scores a number of meteoric hits along the Mid-Atlantic Ridge and possibly on Atlantis itself, which perishes ‘in a single day and night’, according to Plato. The catastrophe is global, encompassing the destruction of the biblical Sodom and Gomorrah” Joseph bases this on the studies of two Swedish geologists, Thomas B. Larsson and Lars Franzén.

This linkage of Sodom with Atlantis is not new. In the 18th century, Carl Friedrich Baër (1719-1797) who was pastor at the Lutheran chapel in the Swedish Embassy in Paris, was possibly the first to propose a connection between the demise of Atlantis and the destruction of Sodom and Gomorrah.

A similar theory was proposed by Roger M. Pearlman in a 2018 booklet [1596]. In this small, difficult-to-read, book the author also suggests, a linkage between the destruction of Sodom & Gomorrah and Atlantis, placing Atlantis in the Jordan Valley and equating Abraham with Atlas – “If Atlas, as described in Plato’s work, was based on a historic figure, Abraham alone meets key criteria.”

On a lighter note, in 1948, William Comyns Beaumont published an extraordinary book, Britain – The Key to World History [0088], in which he claimed among other things, that Edinburgh was the original Jerusalem, London was Damascus and rather worryingly, that Bristol was Sodom.

However, more recently, some demented soul has suggested that “Atlantis comprised three centers of civilization. The main center of civilization was a very large island stretching through what is now the area of the Azores near the mid-Atlantic, down almost to off-shore Brazil in South America. The present-day Islands of the Azores are mountain tops of the original. The second was along the foot of the Himalayans, now occupied by Nepal and Northern Punjab. The third was the plains, now called North America.” Then for good measure, they claimed that Sodom had been located in Washington State in the United States and Gomorrah could be found offshore Miami!(i)

In 2021, Mauro Biglino & Cinzia Mele published two books [1907][1908] that link a number of biblical episodes with locations in the Baltic region. One was the identification of two places in Finland as Sodom and Gomorrah, which was followed by dozens of similar geographical ‘coincidences’(m)!

It was recently (April 2022) written(o) that “What everyone agrees on is that something unusual happened at Tall el-Hammam, an ancient settlement near the Dead Sea.” Unfortunately, that is as far as any agreement has gone. Even the date for the disaster is hotly disputed.

“What was unlike destruction caused by earthquakes or warfare were pottery shards with their outer surfaces melted into glass, some bubbled as if boiled, “bubbled” and melted building brick and plaster, suggesting some unknown high-temperature event. Objects of daily life, carbonized pieces of wooden beams, charred grain, bones and limestone cobbles were burned to a chalklike consistency.”

“But last month Steven Jaret, a postdoctoral fellow at the American Museum of Natural History, and R. Scott Harris, a space scientist at Atlanta’s Fernbank Science Center, challenged these conclusions of the 21 scholars, also in Nature, basically hinting that Collins’ group confused run-of-the-mill smelting and pottery processes with heat from an airburst.”

I think the mystery of S & G will have a longer run than The Mousetrap in London!

(h) A giant space rock demolished an ancient Middle Eastern city and everyone in it – possibly inspiring the Biblical story of Sodom (theconversation.com)

(i) Atlantis | Island of Atlantis | Sodom and Gomorrah | Black Masters of Altlantis (archive.org)

(m) The Baltic Gods of the Bible – The Israel You Don’t Expect – The Tapestry of Time (larazzodeltempo.it)

William Comyns Beaumont (1873-1956) was a British journalist, author and the uncle of the novelist Daphne Du Maurier. He is frequently referred to as an eccentric and not without reason. He published an extraordinary book, Britain – The Key to World History [088], in which he claimed among other things, that Edinburgh was the original Jerusalem, London was Damascus and rather worryingly that Bristol was Sodom (see map).

Beaumont located the Pillars of Heracles at Northern Ireland’s Giant’s Causeway along with its counterpart on the Isle of Staffa in Scotland(h). This suggestion was revived(k) nearly twenty years ago by veteran forum contributor ‘Jameske’ and more recently by Marco Goti. This identification has now also been adopted by Alberto Majrani(i). However, the first to associate the Giant’s Causeway with Atlantis was probably John Whitehurst (1713-1788)(j). James McCulloh (1793-1870) noted [1588.30] that General George Vallancey was disposed to support Whitehurst’s association of the Giant’s Causeway with ‘lost Atalantis’.

In addition, Beaumont was convinced that 18th Dynasty Pharaohs ruled the Welsh Britons. The foreword to the ‘Key’ is available online(d) as is a 1949 newspaper review(e).

In 1975, the American psychologist, Robert Stephanos (1925-2011)(c), founded the Comyns Beaumont Society in Philadelphia. Stephanos appears to have accepted Beaumont’s ideas including their more bizarre elements. In 1994 Stephanos published an article in Fate magazine(f), in which he also claimed that Velikovsky had ‘borrowed’ many of Beaumont’s catastrophist ideas.