Australia has not been totally ignored in the search for Atlantis.  As early as 1852, an Australian newspaper claimed(b), obviously tongue-in-cheek, that Australia was Atlantis, as they were both spelt with a capital ‘A’ and both had gold!

Rex Gilroy is a maverick researcher from ‘Down Under’ who has published a book[598] that bravely claims an antipodean location for Atlantis. 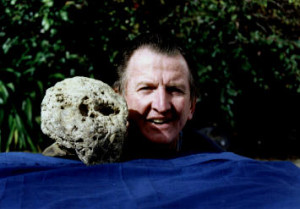 Gilroy has been working on the ‘unexplained’ in his home country for over fifty years and has written several books on ‘mysterious’ Australia. He has claimed evidence for Egyptian and Phoenician connections with Australia(e). He has also named the ancient megalith-building civilisation of Australia, ‘Uru’(d).

His most recent exploit is to mount a search in the Urewera Ranges of New Zealand for the ‘extinct’ Moa.

Australian Paul White among others has claimed that Egyptians reached Australia(i) offering photo evidence(j). These appear to be images of the Gosford Glyphs, also known as Kariong Hieroglyphs, in New South Wales and although they have been long identified as fakes(k), from time to time attention-seeking ‘researchers’ try to revive interest in them.

A completely different link between Australia and Atlantis was suggested by a Russian writer, S. Bashinsky, in 1914, when he claimed that Australia had created as a result of an impact with an asteroid that split a pre-existing landmass, part of which moved eastward to become Atlantis/America. The idea was so totally at variance with geological realities that it got no support.

An anonymous writer on an Internet message board also supports an Australian Atlantis concept referring to a book, Ayer’s Rock: Its People, Their Beliefs and Their Art[133]; allegedly banned by the Australian government, by Charles P. Mountford that provides evidence of very early white visitors to the vast southern island continent.

In 2009, Riaan Booysen, a South African, published on his website(a) a reasoned argument for identifying Australia with Atlantis, based on geology and cartography.

Over the past few years, the father and son team of Steven & Evan Strong have been offering an alternative view of Australia’s prehistory(h), including a claim that Atlantis had existed in Australia(f)(g)>and that there was also a connection with Lemuria(l)!<

2014 brought us an anonymous blog placing Atlantis at Port Arthur in Tasmania (a former penal settlement) and offering a radical re-interpretation of Kircher‘s famous map of Atlantis(c).