John Victor Luce (1920-2011)(b)  was born in Dublin and educated at Cheltenham College, England and Trinity College, Dublin, where he graduated with First Class Honours in Classics and Philosophy in 1942. Among other academic honours, he was a lecturer in Greek at Glasgow University, visiting professor in classics at Trinity College, Hartford, 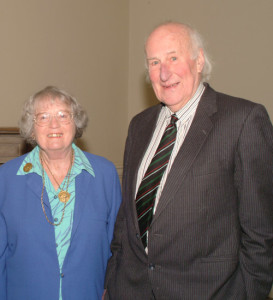 Connecticut and is emeritus professor of classics at Trinity College, Dublin. He has written a number of books including one concerning the eruption of Thera in the second millennium BC. (This was published under slightly different names, in the UK, The End of Atlantis[120] and in the USA, Lost Atlantis: New Light on an Old Legend [121]. During a panel discussion[122] hosted by Indiana University in 1975, Professor Luce presented his view that Plato’s story was a mixture of fact and fiction.

In his book, The End of Atlantis, highlighted[0120.14] how various Greek myths and legends have been proven to contain historical elements and that consequently Plato’s Atlantis story should be studied with this in mind.

He was of the view that the description of Atlantis closely matched that of  the 16th century BC Minoan empire.

Luce encapsulates[120.24] the Atlantis narrative in the following terms; “ I have in mind what Aristotle would call the ‘essential plot’: a great and highly civilised island empire aims at universal domination and is defeated by the early Greeks, especially the Athenians, and later succumbs to a natural cataclysm. On this framework Plato embroiders a large number of remarkable details.” In 1994 Luce wrote a brief paper [123](a) reviewing the Thera evidence in the light of contemporary scientific discoveries.  Luce also suggested that the eruption of Thera was the inspiration behind details in Hesiod’s Theogony[0120.128].