Sea Level Changes. Recent years have seen the production of ever more detailed data relating to sea level changes following the last Ice Age. In 2006 researchers discovered that the Bering Strait between Siberia and Alaska was created around 9000 BC, a thousand years earlier than previously thought.

Such changes could have had a direct bearing on the Atlantis mystery, particularly if Plato’s assertion that its inundation took place 9600 BC is true, as this would place the event at the end of the last Ice Age and the melting of the glaciers with the consequent raising of level of the oceans. Although we are usually given the impression that this deglaciation progressed steadily it would appear that in reality the process continued at different rates and was at times temporarily reversed.

Recent studies(f) have clearly indicated that aboriginal Australians have preserved memories of the rising sea level at the end of the last Ice Age.

A 2000 report(c) from Dr. Robert Baker and Professor Peter G.Flood from the University of New England in New South Wales, suggests that 4,000 years ago sea levels “may have been up to two metres higher than at present, and that sea levels have risen and fallen like a roller coaster over the last 6,000 years.” I would expect that sea levels two metres higher around 2000 BC would have left archaeological evidence on a global scale. Until that is forthcoming, I would treat this claim with caution. 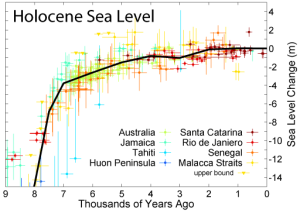 Estimates of the total change in sea levels vary between 300 and 500 ft. The most recent studies have estimated the rate of sea level rise at an average of one metre per century punctuated by occasional increased rates of 2.5 metres per century(a). To complicate the picture further, many areas in northern latitudes that had been depressed by the weight of the enormous ice sheets of the last Ice Age, rose considerably as a result of isostatic rebound when the glaciers melted.

There is general agreement that the raising of the sea levels had dramatic consequences worldwide. Vast landmasses, such as Sundaland, the Celtic Shelf, and in the Caribbean were totally or partially submerged, leaving many of today’s islands as remnants. Communities that had flourished in these regions during the last Ice Age must have been devastated and naturally led to the generation of myths recalling their former glory. Atlantis is assumed to be one such legend with a firm basis in reality.

Other, more controversial effects have also been proposed, such as the breaching of a landbridge that had existed between Spain and North Africa at Gibraltar and/or a similar isthmus between Sicily and Tunisia. James Bramwell reports that in the 1930’s geologists spoke freely of the breaching of a Gibraltar dam around 15,000 years ago. More recently, writers such as Joseph S. Ellul, Sergio Frau and Paulino Zamarro have convincingly based their Atlantis theories on this concept. The Mediterranean sea level is discussed elsewhere.

Other writers have proposed an asteroidal or cometary impact as the cause of catastrophic flooding, but such inundations would have receded fairly rapidly. In the end we are left with the ending of the last Ice Age as the primary cause of profound changes in the topography of our planet that probably included the submergence of one civilisation that we now refer to as Atlantis.

However, Plato introduces another detail into his Atlantis narrative, namely that following the submergence of Atlantis it created a maritime hazard in the form of shoals. Plato wrote that “wherefore also the ocean at that spot has now become impassable and unsearchable, being blocked up by the shoal of mud which the island created as it settled down.” (Timaeus 25d). The implication of this is that the shoals still existed in either Solon’s or Plato’s lifetime. We must also keep in mind that the draft of ships, such as triremes, at that time was about a metre. The attached chart shows how between 5000 BC and the present, the rate of sea level has been relatively slow. Even allowing for any local seismic, tectonic or isostatic activity I would interpret the data to suggest two important facts; first, the flooding of Atlantis could not have taken place before 5000 BC and still be a hazard in the first millennium BC and secondly if it occurred after 5000 BC Atlantis must be still in shallow water.

Kurt Lambeck has demonstrated from a study of Roman fish pens that the sea level along the Italian coast, 2000 years ago, was 1.35 metres below today’s levels. His investigations also included a study of land elevations along the coast that may have been affected by seismic or tectonic processes and found that they had raised the land by 1.22 metres, indicating that global sea levels had risen by just 13cm over the past two millennia, most of which has occurred over the past century(d)! Lambeck’s conclusions have been severely criticised by Izabol Apulia(e).

Furthermore, if the destruction took place before 5000 BC then either Solon or Plato concocted the description of the shoals, which would have no purpose whatsoever!

Sea level changes in the Gulf of Mexico are discussed in an online pdf file(b). In the same region, there is now claimed to be evidence(g) confirming that sea levels were lower during the last Ice Age and that the Yucatan Peninsula was very much larger.