Asahel Davis (1791-?) a former chaplain of the Senate of New York, delivered a lecture in 1839, Antiquities of America [1276]+, in which he offered a strong defence for a Scandinavian, or as he calls them ‘Northmen’, discovery of America five hundred years before Columbus.

When speaking of Atlantic landbridges he stated that “I’m inclined to believe that the land that united the now two continents, was the Atlantis, spoken of by Plato, Homer and Hesiod – Plato saw an account of this land which disappeared, in the hieroglyphics of Egypt.” [p.11].

At least twelve editions of his paper have been published.(a)

John B. Newman, was a 19th century American physician who produced a short volume[488] purporting to demonstrate connections between the Phoenicians, Atlanteans and Native Americans. He was one of the earliest proponents of a large island stretching across the Atlantic from northwest Africa towards America, providing a stepping-stone or landbridge between the Old and New Worlds for animals and man.

It is worth pointing out that it was written in 1849, over thirty years before Ignatius Donnelly published his influential work. 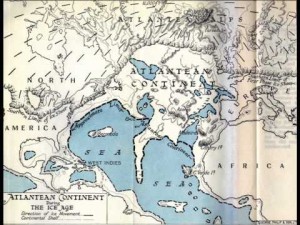