Peru has recently been shown to have been home to one of the oldest monument building cultures in South America. The valleys of the Norte Chico region have revealed cities with pyramids and other large ceremonial structures that have now pushed the date of the earliest buildings to the end of the 4th millennium BC. Dr Jose Oliver, who lectures in Latin American archaeology at University College London, has stated: “that by 3100 BC monumental buildings were already underway, not just at an isolated site but also across a whole region”. Such structures were being erected 400 years before the earliest Egyptian pyramids! The Sechin Bajo site is now (2017) being claimed(r)  as having the oldest manmade structures in the Americas and having been dated to 3500 BC.

The prehistoric coastal city of Caral (3400 BC) has also revealed that quipus, the ancient South American ‘writing’ system, was in use there as early as 3000 BC. A cache of 25 well-preserved quipus was discovered in an ancient warehouse in Peru in June 2014(d). It may be worth noting that systems similar to the quipus have been identified in Hawaii and ancient China(q).

In the 1960s Mrs. Karola Siebert of Lima attempted to link her own finds and other discoveries of structures and inscriptions in Peru with Atlantis. The rather tenuous links suggested were compounded with a high degree of supposition. A few years later James Bailey also opted for Peru as the site of Atlantis. 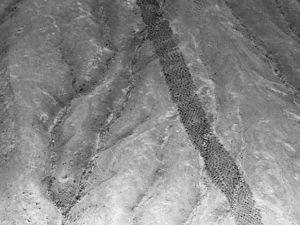 The Smithsonian Magazine claims that Peru was home to the oldest calendar in the New World(g), as well as the oldest solar observatory in the Americas(f), which is credited to the 4th century BC, thirteen towers of Chankillo(h)(i)(t). 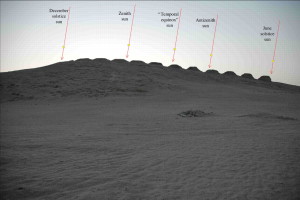 (b) https://www.peruviantimes.com/23/history-of-peru-series-part-1-the-dawn-of-urbanization/6447/ Subsequent parts of this series are to be found in the History section of the Peruvian Times.