Plato (c. 428-347 BC) came from an aristocratic family; his father, Ariston, was descended from the early kings of Athens and his mother, Perictione, was related to the renowned Solon, who was to play a major role in the Atlantis story. In turn, Solon’s ancestry is traced back to Poseidon. Furthermore, classical Greek mythology has claims of a virgin birth for Plato(c)!

Plato and his elder brother, Glaucon, were students of Socrates until the latter’s 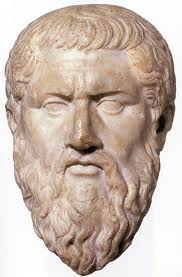 death in 399 BC at the hands of the Athenian authorities. After Socrates’ demise, Plato travelled extensively, including visits to Egypt and Sicily.

While in Sicily he angered the king, Dionysios, who had him seized and brought to the island of Aegina to be sold as a slave, but fortunately Plato was recognised by a fellow Athenian, who bought his freedom and sent him home.

After returning to Athens in 387 BC Plato founded the Academy, a school of science and philosophy, that was to become the model for the university of today. The Academy lasted nearly a thousand years until Emperor Justinian closed it in 529 AD. Perhaps the most famous student of the Academy was Aristotle whose teachings have had a tremendous impact on philosophy right up to the present.

Although many of Plato’s works have survived, we do not have any original Greek texts but are limited to Greek translations of Latin translations of earlier Greek transcriptions, now lost. His extant writings are in the form of letters and dialogues, of which The Republic is considered the most famous. It is two of his dialogues, Timaeus and Critias that contain the earliest unambiguous references to Atlantis.

June 2010 saw Dr. Jay Kennedy, a science historian at the University of Manchester, announce(b) that he had discovered a hidden code in the writings of Plato.  “It is a long and exciting story, but basically I cracked the code. I have shown rigorously that the books do contain codes and symbols and that unraveling them reveals the hidden philosophy of Plato. This is a true discovery, not simply reinterpretation.”

In the opinion of many, Saint Augustine plagiarised some of Plato’s philosophical concepts, effectively ‘Christianising’ him posthumously.

An extensive bibliography of publications relating to all of Plato’s work is available on the Internet(a).

Sadly, Plato’s grave, reputed to have been situated in the grounds of his Academy, has not been located.

Chalcidius (Calcidius) was a fourth century Christian neo-Platonist. At the request of Bishop Hosius of Córdoba he produced one of the earliest Latin versions that we have of part of Plato’s Timaeus, sections 17a-53c(f), based on long lost Greek manuscripts. Chalcidius also gave us a commentary on the text. which was at times more studied than the translation itself. One researcher claims that Chalcidius was possibly Saint Augustine(a).

The oldest known complete manuscript of a number of the dialogues is known as the Clarke Plato (Codex Oxoniensis Clarkianus 39, or Codex Boleianus MS E.D. Clarke 39), which was written, in Greek, in Constantinople in 895(b).

The Digby23 codex contains a 12th century copy of Chalcidius’ Latin translation of Timaeus bound with a copy of The Song of Roland, which is also kept in in Oxford’s Bodleian Library, can now be read online(d).

We had to wait until the 15th century for a full translation, of all the dialogues, also in Latin, to be produced by Marsilio Ficino.