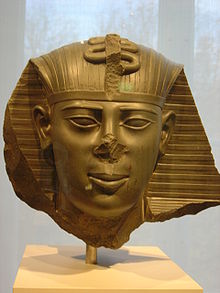 name of the Egyptian pharaoh at the time of Solon’s visit to Sais. However, Phyllis Young Forsyth[266.38] protests that Plato did not claim that Amasis was on the throne at time of Solon’s visit, but merely identified Sais as the home of Amasis. The English translations of Tim.21e by Bury, Jowett and Lee are compatible with this, as is the German translation of Plato’s text by Franz Susemihl(a).  John Michael Greer[0345], among others, supports this view.

Firm historical information for this period is often scanty and sometimes contradictory. However, it is thought that Solon left Athens for a number of years and some of that period may have overlapped with part of Amasis’ reign. Herodotus is our principal source of information regarding Amasis and he clearly mentions (Bk.1.30) that Solon was at the court of Amasis.  Zhirov quotes  the views of V.S. Struve, who believed that Herodotus’  3rd century BC dates were out by 25 years.

Ivan Linforth strongly disputes[041.300] the idea of Solon meeting Amasis  as “chronologically quite improbable”. He claims that Solon (c.630-560 BC) had returned to Athens before the reign of Amasis. John Michael Greer[0345.15], not very convincingly, attempts to counter this idea with the suggestion that at the time of Solon’s visit, Amasis had not yet ascended the throne.