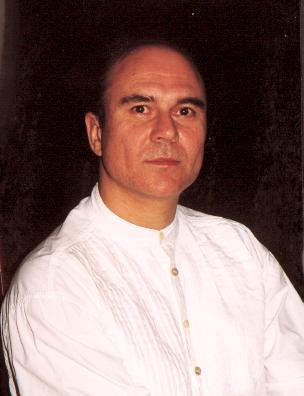 Andrew Collins was born in England in 1957. Over the past twenty years he has been investigating the possible existence of ancient advanced civilisations. He has written three books on the subject of pre-history[072][073][074]. His volume on Atlantis has been well received as an example of how the subject should be researched. Although Collins initially thought that Antarctica had been home to Atlantis, he eventually concluded that Cuba was its location and provided a wealth of evidence to support this view in his book, Gateway to Atlantis. David Rohl, wrote a sympathetic Introduction for the book and repeated and expanded on his expressed views at a subsequent lecture(h).

Collins also wrote of why his chosen Cuba is a better candidate for the location of Atlantis than the Bahamas(r).

Collins has recently written another controversial book[075], on the place of the constellation Cygnus in prehistoric consciousness. Arising from this study, it appears that the position of the Cygnus stars correlate more accurately with the Giza pyramids than those of Orion, which was proposed some years ago by Robert Bauval. Incredibly, a fifteen-year-old Canadian boy has produced a comparable theory(e) involving Mayan cities and a star map. The site proposed by him has now been identified, by people who personally know the location, as either an abandoned cornfield or a marijuana crop(f). In 2018, Gustavo Muniz posted a number of videos on YouTube suggesting an Orion connection with a site in the Amazon Basin(i)!

However, Collins has not been completely seduced by Bauval’s discovery and prudently remarks that the correlation may be just coincidence. Jason Colavito has written a brief critique(b) of this book.

In 2007, he wrote an article(q) for Alternate Perceptions Magazine reviewing the comet impact theory of Richard Firestone et al and its possible implication for his Atlantis theory.

In 2005, Collins published The Cygnus Mystery[075]in which he explored the significance of the Cygnus constellation in the ancient cultures of America, Egypt and Britain.>(a condensed version of the book is available online(s)).< Furthermore, in August 2013 he published a paper(c) with Rodney Hale suggesting that the Göbekli Tepe site is probably aligned with the star Deneb in the Cygnus constellation. This idea has now been expanded on in Collins’ 2014 book, Göbekli Tepe: Genesis of the Gods[0983], although his treatment has been heavily criticised as pseudoscience(g).

>In a recent paper(t), Andrew Collins has disputed Bauval‘s Orion Correlation Theory and has instead offered evidence that the alignment of the three principal Giza pyramids matches more closely the ‘wing’ stars of the Cygnus constellation than the ‘belt’ of Orion!<

Collins has made some dramatic claims regarding the significance of Cygnus including the proposal that “The veneration of Cygnus as a bird associated with cosmic life and death goes back 17,000 years to when the constellation occupied pole position in the northern night sky” and perhaps even more extreme, the idea that “Cygnus is at the root of all the world’s religions.”

Collins continues with the Cygnus-Giza connection in a subsequent offering Beneath the Pyramids[631]. This book reveals the tunnels and chambers beneath the Giza pyramids and their possible connection with the “Hall of Records” predicted by Edgar Cayce to be located there and due for discovery.

In a paper(d), co-authored with Rodney Hale, published in April 2016, Collins returned to the theory of a Cygnus-Giza correlation based on a master plan that they claim can now be demonstrated mathematically.

Collins has now moved on to new ground with his Lightquest[895], in which he attempts to offer a new explanation for the UFO phenomena. He claims that what have been described as UFOs are “the product of sentient light forms and light intelligences that co-exist with humanity, and have done so since time immemorial.”

Nevertheless, Collins returns to the subject of Atlantis with a new book, Atlantis in the Caribbean[1197], which is a revised version of Gateway to Atlantis. In it he  follows some of Otto Muck’s ideas and “Explains how Atlantis was destroyed by a comet, the same comet that formed the mysterious Carolina Bays“.

When the Denisovans were recently identified as an extinct species of hominid, related to the Neanderthals It did not take long for speculative history enthusiasts to jump onboard this new bandwagon. Andrew Collins has now published The Cygnus Key[1509], in which he claims to present “compelling evidence showing that the earliest origins of human culture, religion, and technology derive from the Denisovans, the true creators of the lost civilization long known to exist but never before proved.” Jason Colavito also presents a critique of this latest ‘Cygnus’ book in a two-part(m)(n) offering.

While the first Denisovan remains were found in Siberia, there is now evidence that they were also the earliest  hominins on the Tibetan Plateau (j)

Prior to the identification of the Denisovans, Colin Wilson had claimed that the Neanderthals “were the civilising force behind Atlantis”![0336] One cannot help wondering if another early hominid species is discovered, which is quite possible, will they also be claimed as the progenitors of this ancient lost civilisation?

In this new book Collins also “explains how the stars of Cygnus coincided with the turning point of the heavens at the moment the Denisovan legacy was handed to the first human societies in southern Siberia some 45,000 years ago, catalyzing beliefs in swan ancestry and an understanding of Cygnus as the source of cosmic creation.”   Hmm.

In June 2019, Collins published a two-part article(l) on the Ancient Origins website, in which he explores possibility of Giza’s Great Pyramid has sound technology incorporated into its construction and that “its Dead-end passage function as an infrasound generator?”

Later in 2019, Collins had his 1996 book, From the Ashes of Angels, banned in Turkey(p), it is not clear yet if he is personally banned as well. Apparently it all stems from some perceived support that Collins gave to the Kurdish cause! I hope he refrains from mentioning the Armenians.

Andrew Collins maintains a useful website(a) that has plenty of information on his books and lectures. He also offers an extended section relating to his Atlantis theories(o).