The Deglaciation that occurred at the end of the last Ice Age has attracted a lot of attention from Atlantis seekers because it coincides with Plato’s apparent date for the destruction of Atlantis and provides us with a possible source of the flood that subsequently not only wiped out the Atlanteans but possibly also the Athenians. However, meltwater from deglaciation causes global sea levels to rise very, very, slowly and so is extremely unlikely to have caused the destruction of the Atlanteans or Athenians as described by Plato.

The melting of the ice caps gradually caused the ocean levels to rise over a period of thousands of years and at times the retreat of the glaciers was halted and occasionally reversed. Although the melting of the ice was relatively steady, the water produced did not always reach the sea in a steady flow. Instead, it was frequently punctuated by enormous discharges of water particularly where ice dams had retained vast melt water lakes. 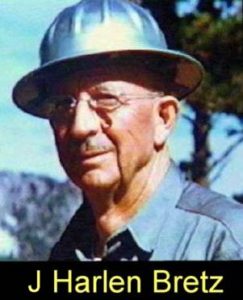 carved the landscape of Eastern Washington state, in just a few days. In spite of acrimonious opposition from the geology establishment of the day, Bretz persevered with his investigations, which eventually led to the identification of Lake Missoula as the probable culprit. Bretz was finally vindicated in 1979 when, in his nineties, he was awarded the prestigious Penrose Medal for his work(f). There is a beautifully illustrated National Geographic online article that reviews Bretz’s work(i).

These discharges of huge quantities of water are recognisable as relatively sudden spikes in the rate of sea level increases and are referred to as Melt Water Pulses WMP).

Lake Missoula in what is today the state of Montana is one of the best studied of these glacial lakes. The regular discharges from Lake Missoula, following ice dam collapses, were responsible for the creation of the dramatic Scablands of the North-Western United States. Studies have revealed that between forty and eighty such floods were released from Lake Missoula alone.

However, an alternative to Lake Missoula as the cause of the scablands has been recently proposed(g), namely, the younger-dryas comet impact event. This event was highlighted by Richard Firestone and his colleagues in The Cycle of Cosmic Catastrophes[0110]. My problem with the idea of the comet impact is that it was a single event, whereas the Missoula discharges were according to some authorities quite numerous!

Lake Missoula and its flood path

The power of fast flowing water was recently highlighted by a report published(c) in the journal of America’s National Academy of Sciences, where a study of Iceland’s unpronounceable Jokulsargljufur canyon indicated that this huge feature was created in a matter of days. In Iceland, such glacial outburst floods are known as Jökulhlaups(d).

It has now been estimated by scientists that around 6200 BC the ancient glacial Lakes Agassiz and Ojibway discharged into the Atlantic Ocean. These lakes were more than twice the size of the Caspian Sea and on their own are estimated to have raised sea levels by up to 4 feet. The freshwater flow is calculated at between 25 and 50 times the flow of the Amazon River and recent studies suggest that this sudden inflow of fresh water brought the Gulf Stream to a halt for more than a hundred years. A 2016 report(e) from CAGE (Center for Arctic Gas Hydrate, Climate and Environment) suggests that the Gulf Stream was not interrupted during the Ice Age.

*Graham Hancock, in his Magicians of the Gods [1119], reviews, at length, the theories of J Harlen Bretz and after a shared field trip and lengthy discussions with Randall Carlson, concluded that Bretz had probably only revealed part of the Scablands story. Hancock has pointed out that Bretz was unaware of the cometary impact identified by Richard Firestone et al., which coincided with the start of the Younger Dryas  period 12,800 years ago. This impact theory continues to amass confirmatory data, but opposition has not abated yet. The cometary impact, the creation of the Scablands and the start of the Younger Dryas cooling period all seem to coincide temporally to a degree that strongly suggests an interconnection.*

Nick Thom has suggested[776] that an even more dramatic consequence of the discharge from Lake Agassiz was the tilting of the Earth’s axis leading to the biblical Deluge and recorded around the world in hundreds of flood myths!

Similar melt water lakes across Northern Europe retained by ice dams produced equally dramatic discharges as the dams periodically broke. One of these occupied what is now the Baltic Sea and was 30 metres above the then ocean level before bursting into the North Sea around 10,000 BC. Less well known is the flooding that took place further east resulting in the creation of a vast inland sea of which the Black and Caspian Seas were just a small part. Ronnie Gallagher has written a revealing paper on the subject(a).

It is worth noting that, although on a smaller scale, two thirds of the thousands of Himalayan glaciers contain glacial lakes, which because of global warming today are growing at risk of bursting with consequent catastrophic results. As these glaciers retreat, apart from the damage to people and property the discharges will gradually reduce the downstream flow of water to rivers such as the Ganges.

Concurrent, with these huge melt water lake discharges were Heinrich Events, named after

paleoclimatologist, Hartmut Heinrich, who as recently as 1988 published evidence that there had been at least six massive discharges of icebergs from the Laurentide Ice Sheet during the last Ice Age. These discharges could have contained millions of cubic kilometres of ice and must have caused substantial sea level rises. This Laurentide Ice Sheet was an enormous mass of ice that stretched from the Arctic through eastern Canada to the northern half of the United States that covered over 5 million square miles. The weight of this ice sheet was so great that it has been calculated that it depressed the earth’s crust by nearly half a mile. A recent paper contends that it was the collapse of this ice sheet, 8000 years ago causing a sea level rise that led to the breaching of a ridge damming the Bosporus and the inundation of the then freshwater Black Sea, which flooded over 73,000 square km of land.

In the southern hemisphere it was discovered a few years ago (Science, Dec.22, 2000) that the River Amazon had experienced a doubling of its outflow between 9800 BC and 9700 BC, probably as a consequence of the melting of Andean glaciers and perhaps increased rainfall during this period. The dates proposed are very close to the 9600 BC date provided by Plato for the submergence of Atlantis.

All these worldwide discharges must have resulted in the inundation of low-lying landmasses, such as the Celtic Shelf or Sundaland, in fits and starts forcing the inhabitants of these regions to regularly migrate to higher ground.

Since it is reasonable to assume that a large percentage of human settlements were then, as now, located along coasts, particularly at river mouths, the consequence for these embryonic cultures must have been catastrophic. It is very easy to see how legends of sunken civilisations probably have a very sound basis in fact. Two books by Graham Hancock[274] and Stephen Oppenheimer[004] have covered this idea in greater detail, lending credibility to the idea of a sunken island such as Atlantis.

However, it can be reasonably argued that the effects of deglaciation are not what Plato described. He spoke of earthquake and a flood that overwhelmed both the Athenians and the Atlanteans. This would more closely match the aftermath of a large seismic or tectonic event that generated enormous tsunamis rather than the gradual rising of sea levels, which even at its most dramatic could never have produced the effect of sinking Atlantis overnight.

However, the waters of tsunamis eventually flow back to the sea, but Plato’s account describes the event resulting in the creation of muddy shallows. To me it sounds more like liquefaction which occurs in soil with particular characteristics when subjected to an earthquake(b), similar to the destruction of the cities of Canopus and Herakleion near Alexandria.

A website that graphically illustrates the process of deglaciation after the last Ice Age is available(h).